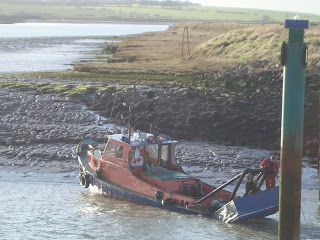 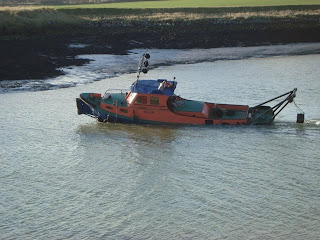 
If you happen to be in the right place at the right time you may end up with a news scoop.


The dredger, ‘Beaver’, was in the process of ‘scooping’ mud from Burnham Yacht Harbour on the afternoon of Monday, 14th February, when I noticed she was heeling dangerously to her port side. Would she capsize, I wondered? I watched anxiously as she continued and came to a halt, when she beached on the mud at the side of the entrance to the Yacht Harbour. At that moment a Police launch appeared and one her crew asked the man operating ‘Beaver’ if he needed assistance, but he declined. I observed the man getting onto the dredge which he had hoisted clear of the water. Thereupon he nonchalantly unhooked a wire that had fouled the dredge. Having freed the wire he reversed ‘Beaver’ into the Yacht Harbour and moored her beside one of the pontoons.


I was relieved that the incident had not resulted in something very serious, such as the dredger capsizing and the man having to swim for his life. I was glad I had not ended up with a news scoop, and I was thankful that I had not been required to play a part in a rescue mission. Incidentally, the man operating the dredger was wearing an overall, under which there may have been a life jacket. If it has been his practice to wear a life jacket when working the dredger, may he continue to do so.