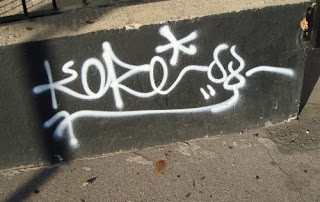 Yesterday when I was on the lookout for litter I came across this primitive graffiti which had been skilfully sprayed onto a contrasting black wall surface. It seems that the person who illegally did it wanted to make a point by leaving a message or tag for those who understand the meaning of the symbols, some of which are in the form of alphabetical letters. As I am not initiated in the culture of tagging and graffiti I am in the dark as to the meaning. I can make out what I believe to be certain letters, such as a ‘K’ or a ‘T’ in the form of a cross and an ‘O’ and ‘e’; there may also be a ‘d’ and a ‘g’ plus the number 7. A small symbolic figure above the lettering could represent a walking man and below it, there’s a pair of upside down inverted commas.

In Chicago, gangs use graffiti to mark the boundaries of territories they control, and their symbols, signs and tags are well documented. Besides marking turf areas, their graffiti is intended to convey messages of defiance or denigration to other gangs. There, the sub-culture of graffiti symbolism is highly developed. In an effort to prevent similar patterns of ant-social behaviour in the UK the Government in March 2004 brought in legislation to counteract the spread of graffiti, but you need only visit some of the big cities to see that the measures have not been effective. London, Bristol, Exeter, Manchester and Liverpool all have this problem of anti-social behaviour.

Obviously there’s a difference between the sort of Chicago style, low-grade intimidating graffiti used by gangs or individuals, and graphic wall paintings that highlight a cause or make a poignant statement, political, social or satirical. In this category are the murals of Northern Ireland which were created to intimidate opponents and mark territories, both by Protestants and Catholics, but now they are considered as worthy Art objects for tourists to see. The Bristol artist known as Banksy became famous because of his prolific, unauthorized external murals on public and private buildings throughout the City. Only recently in June, Bristol City Museum organized an exhibition of his diverse Art, but a similar accolade was not given to Richard Foskett who was found guilty of targeting over 30 buildings in Exeter with his spray paint vandalism. The cost of removing such unwanted graffiti that blights neighbourhoods, public areas, train carriages, subways etc. is astronomical; therefore the expenditure and effort put into minimizing this criminal and unsocial activity can truly be justified.