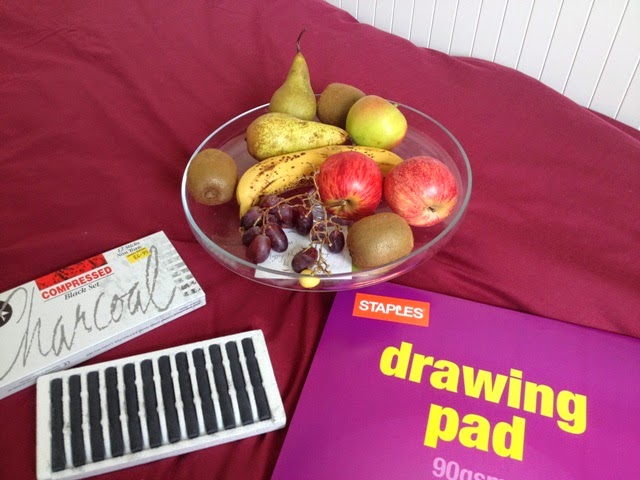 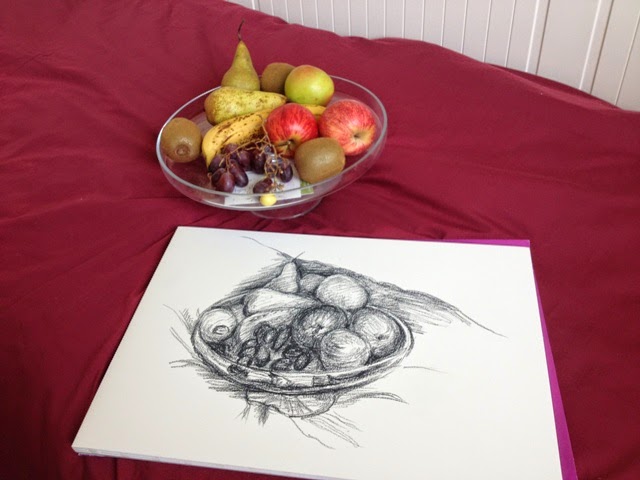 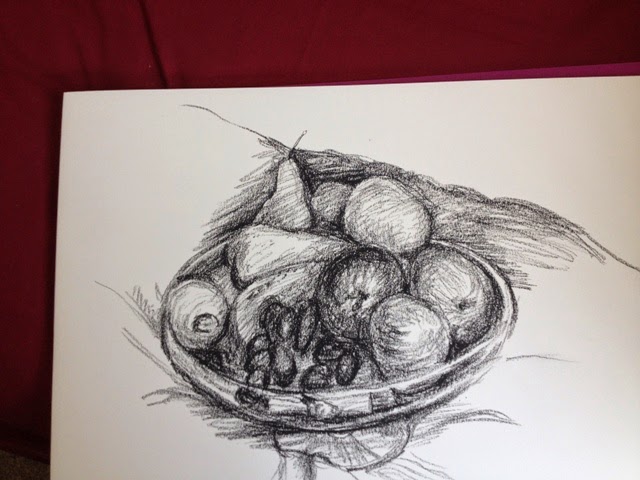 Drawing as distinct from painting is done with a medium such as pencil, charcoal, or crayon, and excludes the use of paint applied with a brush, sponge or airbrush as with watercolours, oils or acrylics. The exception to the aforementioned solid media is liquid usually in the form of ink that is applied with a pen, quill or similar tool, e.g., a piece of bamboo that has been shaped for the purpose of transferring the medium to the chosen surface or base upon which the drawing is made.


Both drawing and painting are abstract means of expressing ideas, emotions, feelings and coded facts. An architect’s presentation drawing may portray the appearance of a finished building, but his architectural drawings will convey factual information such as dimensions and materials used in the construction of the building.


With time on my hands, since I did not take ‘Minnow’ on the proposed cruise along the South Coast of England, I thought I would try my hand at drawing. My subject was a still life depicting fruit on a glass stand. Although the fruit was colourful, I chose to concentrate on representing tonal differences, for creating the illusion of their forms; therefore I did my drawing with compressed charcoal, which is monochromatic. By depicting tonal differences brought about by the interplay of light and shade and by the tones of colours of the objects, I hoped to represent their forms.


Young children have few inhibitions when it comes to drawing, and they will intuitively create linear images that represent their feelings and their knowledge of chosen subjects. Adults often believe they are unable to draw because they think they have lost this instinctive, innate ability; some will even declare they never had such ability. More than likely, they were never encouraged to draw when they were young.


I suggest that if you have time on your hands and you want to do something rewarding, have a go at making a drawing. The drawing can be of anything and in any form. You can be as creative as you like, even to the extent of creating something that is entirely abstract.  Starting is the most difficult thing. Make a mark on the paper, and you are away into a land where you invent your own rules and you are only accountable to yourself. You can keep your art private, or show it to others.


What is the Oldest Drawing?


http://en.wikipedia.org/wiki/Cave_painting
Posted by William Serjeant at 11:49 am

Very good Bill. A man of many talents! I can't even draw a straight line!

As an amatuer dawber myself, that is a lovely example of still life.
Nice one Bill

Few straight lines can be found in nature; even the horizon is curved.

I enjoyed making the drawing and I found the process of creating it satisfying. I set the rules and tried to obey them. The result was pleasing to me, and that's what mattered, but if it is pleasing to others, that is a bonus.