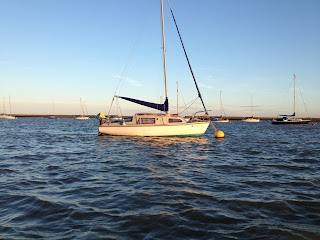 Well, we made it to Bradwell Marina, but there was a tussle at the entrance of the River Blackwater. A strong south-westerly wind waged war against a fast-moving flood tide. Churning, foam-crested waves smashed against ‘Ladybird’s’ bow. Spray flew over her. Already reefed, she valiantly fought to windward, but the sheer force of wind demanded further shortening of sail. There was no time for extracting the lower wooden batten before rotating the boom. From my seated position at the base of the mast I wound the handle and watched the batten bend around the boom until it took the form of a spiral.


Three hundred yards more, then we could heave to, start the engine, take in sail and proceed to the creek in search of a mooring. That was easier said than done! The wind was so strong and the waves so chaotic, that steering by the rudder alone was impossible. For any chance of progressing in the right direction, we had to steer with both the engine and the rudder. Picking up a mooring was very difficult, but by a fluke we managed it.


There, we relaxed, brewed tea and had a late lunch. Having regained our strength and composure we called the marina on the VHF, requesting a berth for the night. Our sojourn overnight was quiet.  The wind died, and there was a half-moon.


On Tuesday morning we had an easy sail as far as the Swin Spitway where we planned on taking the flood tide to Burnham. However, things turned nasty. The rain lashed down and the south-westerly increased to around a force 6, perhaps briefly to a 7. To make matters worse, we arrived at the Spitway before the turn of the tide. This left us battling to windward, only gaining a hundred or so yards on each tack. There was one sensible course of action, and that was to head for shelter in the River Colne. At Pyefleet Creek we found a mooring, removed our wet clothing and took sustenance in the form of cheese and salad-filled baps, choc bars and coffee.
Fully nourished and rested we moved to Brightlingsea Marina where we rafted alongside a bigger yacht at the far end of the southern pontoon. The sky brightened, and patches of blue appeared between the clouds. Later that evening we ‘dined’ on ham, egg and chips at the Yacht Club. At the same time we admired the view over the creek and beyond to the trots. A beautiful smack CK 212 was drying out at the scrubbing posts. 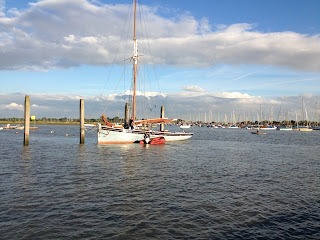 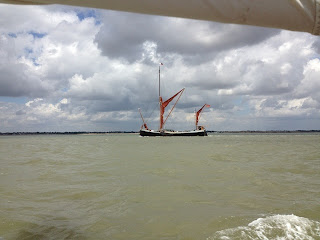 Wednesday mid morning we set off for a return passage to Burnham. All went as planned. A fresh south-westerly backed in our favour. On the home leg from the Spitway to Burnham, we had a spanking sail, comprised of short and long tacks between Maplin Sands and Raysand. Several yachts were out and about, but the only ones that overtook us were motoring. Two coasters exchanged berths at Wallasea Island. Both passed nearby - one outbound and the other in-bound to discharge her cargo. 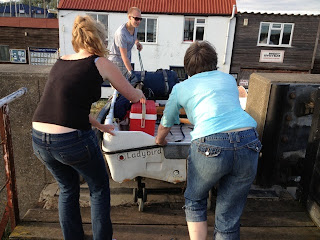 Soon after arriving at ‘Ladybird’s’ mooring we observed a reception party gathering at the nearby pontoon. Many helping hands made short the otherwise tedious business of humping our gear and dinghy up the ramp from the pontoon.


During our short cruise we experienced challenging moments because of strong, adverse winds, but in the end we felt elated by having achieved our objectives. Comradeship, teamwork, good humour and laughter brought their rewards. We had a cruise that we shall remember with joy and with thanksgiving.
Posted by William Serjeant at 4:41 pm