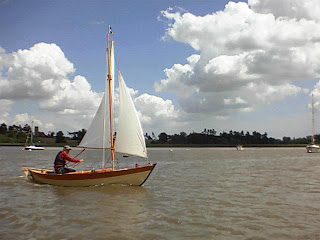 I wondered how many Micro-Sailboat pennants were flying throughout the world. I guessed there were very few, as there had been little response to the formation of the Micro-Sailboat Club for eco boat builders.


My conviction of the need for restraint in the use of nature's materials for boatbuilding, had spurred me on to produce the Micro-Sailboat Web site. It was a dream of mine to influence at least a few people to conserve natural resources and recycle wherever possible, but to persuade them to change their habits and their views; I knew that would be an uphill task. Usually something catastrophic has to happen before minds are focussed, but even with the world's climate under threat, because of man's abuse of nature, the majority of us are not concerned. A prime reason for our lack of concern is that we believe we shall not be victims of our own pillaging – we believe we shall not be directly affected - certainly not in our lifetime. We confirm that all is well with the world. Surely we can all breathe relatively fresh air, and in the Western World, we have access to clean drinking water. As far as we are concerned, there has been no catastrophe that has focussed our minds upon the dire situation.


As I pondered these things, I was taken with the peacefulness of the scene. ‘Micro’, my partially recycled sailboat, was tethered to her Bruce anchor. I felt comforted that her anchor was attached to three metres of galvanised chain and thirty metres of rope. This would be ‘our’ security during the night when the spring tide would lift the boat a full six metres. There, in the River Roach, we were almost entirely protected from what little wind there was. The sky was endless - a vacuous blue ether, save for a few wispy white vapours left by aeroplanes, polluters of the ozone.


On tuning into this apparent bliss, while listening to the almost imperceptible music of rippling water, I became aware of a distant drone of combined harvesters. If I cocked my ear skywards, I could hear the throb of plane engines, but, after a while, these intrusions no longer invaded my consciousness.


Dinner was easy to prepare. I simply boiled water for dehydrated mashed potato, and I used the same water for heating a vacuum-packed chicken curry. I then consumed the first course, which was followed by creamy Muller yoghurt, and a cup of decaffeinated, unsweetened coffee. Satisfied with my repast, I settled down to immerse myself in my favourite book, the Bible.


Shortly before nightfall, a Cornish Shrimper anchored astern of us. She was a couple of hundred yards downstream, and very close to a stony, weed-covered bank. I could smell that delicious, earthy 'pong' of mud and marine vegetation, so typical of East Coast Rivers. It was truly a relaxing elixir. I deeply inhaled the medicinal gases and felt invigorated. The time was 2100, at low water. As the dew was descending, I pulled back the tent to its full extent and made it fast, but kept the flaps open by their retaining cords. There was barely sufficient light to continue reading.

(To be continued.)
Posted by William Serjeant at 8:55 pm