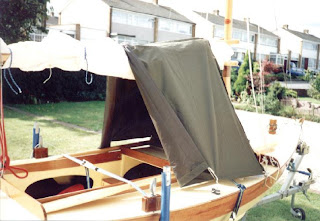 Tent folded to form a windbreak


With the rudder suitably secured, and the sail hoisted, I released the painter. I was to experience perhaps the most exhilarating sail of my life. 'Micro' lifted off the water. I needed absolute concentration to keep her on course. With a Force 6 from astern, an error of steering could have resulted in a disastrous capsize. The tide was against the wind, and my tiny boat leapt over crested waves. Explosive spray from the bow whisked into my eyes, causing them to smart. Nature's tears flowed down my cheeks to wash the brine away.


I could not have consulted the chart under those conditions, because it would have been rendered into pulp by the spray. My specs would have been clouded with salty droplets. I could only pilot the boat by reading the navigation marks and by observing the whereabouts of other boats, on the assumption that they would be in the deep water channel. I remembered from the chart that if I steered a course to a point about two cables from the northwest shore of Arne Point I would be clear of all dangers.


The windward bank of the Wareham Channel provided shelter, as ‘Micro’ reached to the east. Ahead lay the sands of Gold Point, which marked the spot where we would be on the wind when heading for Long Island. The shallow, muddy water was similar to the brown soup of the Thames estuary, so characteristic of my home waters in the southeast of England. I felt at home, but I was surprised at the extent of crested waves where windsurfers were skimming to and fro in consort with lightweight catamarans. They were in their element, but 'Micro' was finding the going tough. An army of white warriors, wave after waver of them, charged against her, intent on preventing her from going southwards.


Hiking the boat was fantastic fun, because I had gained confidence to sit on her gunwale close to her stern deck. This trimmed the boat so that she was slightly down at her stern which reduced weather helm. With her storm jib set, instead of her working jib, she had been griping into the wind. This had required excessive use of her rudder to compensate. A permanent solution to this problem would have been the addition of a skeg.


In the distance I could see Shipstal Point, where there were several DCA dinghies at anchor. An adverse eddy from the Wych Channel slowed us down, and the raised land off the Point provided a lee, so that we crept along at a snail’s pace.


On our arrival at the rendezvous, I rapidly downed sail. Because of my tiredness and my need to row to where I wanted to lay the anchor, I left the sail in an untidy bundle held by its lazy jack. I observed Liz Baker pointing her camera in my direction, and I wondered if she was about to take a photo of my dishevelled boat and the exhausted crew. I felt I wanted to shrink below deck and hide my head from many inquisitive stares, as everyone was looking at us.

(To be continued.)
Posted by William Serjeant at 9:52 pm