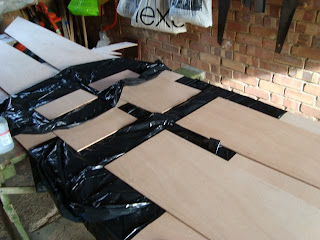 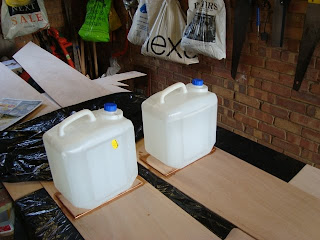 Side Panels and their Butt Joints


The last time I got around to doing anything with the new boat was on Monday, 25th October. That day I completed the transom. Nine days later, i.e., today, I managed to find an hour when I could get something done. I knew the grandchildren were about to arrive, but the outside air temperature was an unbelievably 14 degrees Celsius – just high enough for epoxy to gel.

I set up the temporary bench in the garage and placed a piece of plywood on it to make the surface flat. Then I covered the area where I would be doing the epoxying with two black bin liners. Before mixing the hardener with the epoxy I roughly arranged the side panels as they would be when finished with their butt plates. Then I applied the mixed epoxy to the appropriate surfaces, paying particular attention to the ends of the panels by giving them three coats, one of which was thickened with a small quantity of Cab-o-sil. After applying three coats of epoxy to every surface I extracted the upper bin liner to leave a clean one under the panels. Finally I butted the joints together and placed the butt plates over them. To keep everything together and apply pressure to the assembly I used filled water cans as weights.

Because the air temperature was on the low side for the epoxy to gel, I set up a hot air blower under a canopy. This did the trick and the epoxy showed signs of hardening within three hours. Six hours is normally the time it takes to fully harden with the UK Epoxy Resin I use, but it is preferable not to disturb the epoxy within twelve hours, preferably twenty-four hours.

Well, the grandchildren did arrive, and they gathered in the garage to watch what I was doing, and to ask questions as children always do, never without the inevitable question, “Why?” When you give them an answer, invariably their next question is, “Why?” and so on.


Today, they very quickly became bored with Grandad, or Granddad, according to your preference of spelling the word, because he was not playing with them. On the other hand Nanny was doing something far more exciting and interesting; she was weeding the garden and hunting for worms. I was grateful for the distraction, and after clearing up and cleaning the brush I had used for applying the epoxy, I locked the garage so that little hands would be kept at bay.
Posted by William Serjeant at 8:08 pm