The map is reproduced with kind permission of Ordnance Survey 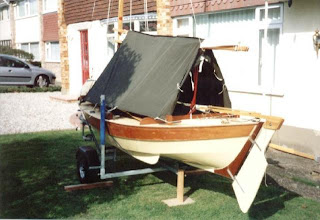 
I wanted to reach the River Roach before the last of the ebb; therefore I made sail as before, but this time I shook out the reef so that I would have enough power to drive the boat through the waves.


Bridgemarsh Island lies halfway between Fambridge and Burnham. Althorne Creek separates it from the mainland. The Island is nothing more than a low-lying area of salt marsh where birds nest during the spring and summer months. I almost had the River to myself, except for a couple of small yachts under power and a larger one under sail.


I took the opportunity of heaving to in the more open water, so that I could put on my waterproof gear. The wind had increased, which caused spray to dampen my clothing and the wind made me cold.


Before arriving at Burnham I passed a large, rusty Russian ship that was having her cargo of wood taken off her by spider-like cranes at Wallasea Wharf. Rod fishermen cast their lines from the end of the jetty, perhaps hopeful that they may catch whiting or plaice. On the other side of the River there was a red brick cottage in a setting of variegated green hues comprised of trees, hedges, shrubs and a sloping lawn. Cloud shadows moved briskly over the scene.


The next stretch of water through the Burnham moorings was testing, because the wind increased yet again, with gusts up to Force 5. I couldn’t reef the mainsail because of there being insufficient room between the moored yachts to have time to do it. I could have doused all sail and rowed; instead, I played ‘Micro’s’ sails, but I found the job a bit tricky. I held the jib sheet in one hand, and the tiller and mainsheet in the other. When tacking, I had to be quick, because the tiller extension had to be latched into its retaining slot before I could grab the tiller with the other hand; this was because the mainsheet was attached to the coaming. While doing this I had to attend to the sheets and move to the other side of the boat. Tacking would have been easier if I had made a metal or rope horse over the aft end of the tiller. At each tack I had to find a way through the moored yachts.


When I finally got clear of the moorings, I hove-to and reefed the mainsail. I still needed the jib so that I could drive the boat through the waves.


For the third time the wind increased, but then it veered to the southeast which was more favourable. I put in short and long tacks until I arrived at the Branklet Spit Buoy.


Within the River Roach there were several yachts anchored by the west bank, but they were exposed to the south-easterly wind. I decided to head for the east side of the River, where I set ‘Micro’s’ anchor in soft mud. She was entirely protected from the wind so that her sails hang limply. By then the flood had started to run.


I folded and lashed the mainsail between the yard and boom in preparation for her new tent that I would use for the first time. The spars would support the ridge of the tent and its base would be kept in place with lashings and bungees. I assembled the cooker and made a cup of tea. Afterwards I prepared the evening meal which consisted of tinned potatoes, tinned peas and cold corned beef, plus strawberry yoghurt for a sweet. This was not a gourmet meal, but it was sufficient for my needs and dead simple to prepare. As I ate my meal I relaxed and took in the scenery. At the top of the mast, the Dinghy Cruising Association pennant gently fluttered.


Two yachts anchored nearby. Meanwhile, I rigged the tent, laid out my sleeping bag on the pneumatic mattress, found my miniature torch; then I read passages from the Bible. Apart from the sound of swans that flew overhead, the peacefulness of the moment was perfect for meditation - thoughts about God's graciousness, His love and the wonder of His creation. The sunset was truly beautiful - a melting pot of fiery hues of graduated purples, greens, blues, greys and eventually a black nothingness, except for a halo of orange light to the northwest that hovered over Burnham. Later that night there was a canopy of twinkling stars.


Warm as toast, I lay back on my comfortable mattress, and I was gently rocked by the wavelets. I could hear a faint whisper of moving water that slid along the hull. This surely was my reward for hours spent building 'Micro'. I had fashioned her parts and shaped her every detail, painted her and made her glisten like gold. She would grow old and battered in time, but just then she was a budding young maiden at her pristine best. I delighted in her beauty.


At daylight I was up and about making breakfast which consisted of Muesli and a Marmite sandwich along with hot tea. I took the tent down and gave myself a refreshing wash and a shave. A cool wind rippled the water. It was time to up anchor and make sail. I needed to be in the River Crouch by low water to take full advantage of the flood tide for returning to Hullbridge. There was no sign of life aboard the neighbouring yachts. ‘Micro’ ghosted toward the Branklet Spit buoy.


The return to Hullbridge was uneventful. It was unbearably hot and sticky. I tied up to a buoy at Fambridge and waited there until an hour before high water so that I would arrive at Hullbridge at the top of the tide. I discovered that the Brandy Hole Regatta was in full swing; therefore I had to pick my way carefully through the fleets of participating yachts and dinghies.


My car and trailer were just as I had left them, and within twenty minutes I had the mast and rigging on the roof rack and the boat out of the water.


I had thoroughly enjoyed my second adventure and I looked forward to the next one.
Posted by William Serjeant at 3:39 pm

Hi Bill, what design is Micro and when did you complete the voyages you so eleqently describe?
Regards
Paul

Hi Paul,
She was a highly modified Storm Petrel by Swallow Boats. They no longer produce her and have replaced her with the Storm 15 which is a foot longer and with higher topsides.

I built and owned 'Micro' in 1970/71. I bought the hull panels; everything else was of my own design.
Bill.

Thanks for the info Bill

Just put it down to a 'senior moment'. I seem to have quite a few of them these days!!