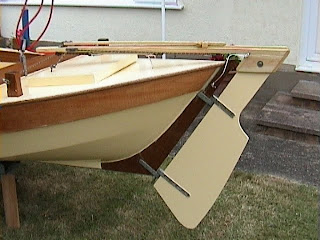 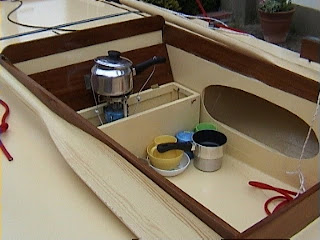 
For my second cruise aboard ‘Micro’ I chose to launch at Hullbridge which is situated on the upper reaches of the River Crouch, Essex, England. About 9 miles to the east, the River Roach branches off the Crouch toward the south and meanders to the southwest.


I planned a two day trip to Paglesham over a distance of 18 miles when measured directly, but in practice, the distance was more because of headwinds.


For some unaccountable reason I felt nervous before setting off. I had thoroughly checked the provisions needed for the cruise, and 'Micro' had been put through her paces on her maiden voyage. There was no rational reason for my anxiety.


High water was at 1400 hours, and I knew from the tide table that there would be sufficient water for launching the boat at the Ferry Road public slipway. I drove into the car park from where I could reverse down the fairly steep gradient. There I parked the boat to one side while I set up the rigging and mentally rehearsed how I would do the launching.


Because the concrete slipway had a short drop at the end of it, I had to be careful not to let the wheels of the trailer go beyond that point. On a previous visit to the slipway I had noticed some large stones below it; therefore I decided not to ship the rudder until after launching the boat.


I stopped the trailer when the stern of the boat was immersed, and I got out of the car to complete the launching. A handful of spectators made suggestions as to how I should proceed.


"Give her a shove!" one remarked, and another shouted, “Do you want any help?”


By that time I was in the water up to my knees, and one of my plastic slip-on sandals came off. It started to float away with the current. Trying to hide the fact that I was flustered, I nonchalantly waded into deeper water to retrieve it. I was fortunate not to stub a toe on one of the large stones hidden in the muddy water.


'Micro' was above all this. She remained calm and she looked rather serene when she floated off her trailer. I tethered her to a convenient branch and I whispered to her that I would be away for a short while for the purpose of parking the car and trailer. As a security measure I reversed the trailer so that it was wedged between the car and a hedge. I also padlocked the trailer to the ball hitch.


By then, the ebb had started to run against a cold easterly wind of about a Force 2, which made the water rather choppy. It seemed unwise to make sail when the River was packed with yachts on their moorings. They were like restless animals trying to escape their tethers as the ebb helped me to row against the wind.


Gradually the moorings thinned out and I thought I would ship the rudder and make sail. I grabbed a buoy and tied it alongside. The boat lay quietly to it. I gave myself a shot of energy by eating a Mars Bar and drinking orange juice. The nearby poplar trees rustled and waved in the wind, and above them there were towering grey cumulus clouds.


I was no longer anxious - I was at peace. Moments later I was perplexed and frustrated because I couldn’t ship the rudder. I leant over the stern, put a hand on the tiller and held the blade with the other hand. Time and again I could not line up the pintles and gudgeons because of the speeding water. Eventually I succeeded in getting them in line and I thankfully pushed the rudder into place.


I gingerly hoisted a reefed mainsail and I was relieved to find that the boat lay quietly as if she were hove to. She was tied to the buoy amidships. Her sail was left free to shake and there was no tendency for her to move forward. As soon as I set the jib I let go of the mooring, then I hauled in the sheets. Immediately the sails stopped shaking and there was relative quiet.


Would I be able to make to windward at Brandy Hole Yacht Club where the River narrows? Would the boat behave herself when sailing through the Club moorings? All went well, and soon I found myself sailing on a fine reach over more open water where there were a couple of youngsters water-skiing who took great delight in passing as close as they dare to ‘Micro’. They were obviously amused, but I was not. Then I remembered that I did stupid things in my youth. The near miss caused me to think about insurance, because I had not got around to insuring my boat.


After an enjoyable beat to Fambridge, I tied ‘Micro’ to a vacant mooring. The water was a bit bumpy because the wind was against the ebb. This presented me with an opportunity for trying the cooker in less than perfect conditions. I found that the saucepan stayed on the cooker and within minutes I was enjoying a piping hot cup of Brookbond tea. Cheese, tomatoes, onions and Branston Pickle, placed between two slices of buttered wholemeal bread made a tasty sandwich. In addition to the sandwich I downed a ripe banana and a Kitkat.
Posted by William Serjeant at 11:49 pm