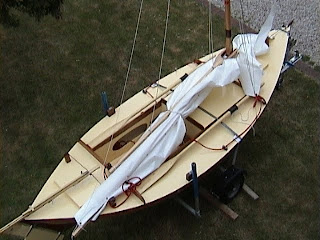 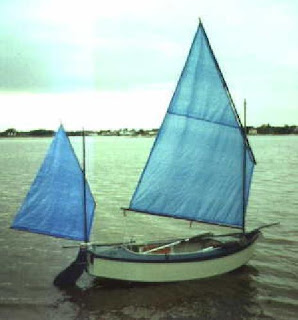 Derek Milbourne, known as Jay, was the first person with whom I spoke. I noticed that the US flag, the Stars and Stripes, flew at the stern of his Dodnor Star Trekka trailer sailer. He informed me that he had dual nationality and, because he hated the numerous EEC edicts affecting small vessels, including his 'dinghy with a lid', he chose to register her under the American flag rather than the British one. That way, his boat was exempt from the regulations. She was festooned with multi-coloured flags and pennants. The one I liked best had the words, 'I love sailing', in dark purple lettering that stood out from a white background.


Chris Jenkins was the next person to greet me. His spotless pale blue Potter AX had great character and charm, besides being a very practical boat. She was admirably suitable for single-handing, and her cabin had more than enough space for one person to live aboard for days at a time. She was not too heavy for a solo crew to retrieve from the water or launch from a road trailer. Additionally, she could sail in shallow water and take the ground while remaining upright.


Chris and Doug invited me to raft beside their Wanderer, but I declined their offer, because I wanted to anchor my boat. Liz Baker knew the place well, and pointed to a safe spot where I might set my anchor. She also asked if I would like to take a line from her Cormorant before setting my anchor, so that I could have the option of setting it on the beach; in which case both boats could be moved there when required. I thanked her for her kind offer. In the end, I anchored ‘Micro’ independently to swing according to wind and tide.


Three more boats arrived, one after the other.


The first was designed and built by Keith Holdsworth. She was shorter and wider than 'Micro', and she had two masts; one was at her bow and the other at her transom. The boat's name was 'Flying Pig’. I thought she looked quite cute. The following day he enthusiastically explained how her folding metal bilge keels hinged sideways when her rudder touched bottom.


The second dinghy to arrive was a heavily reefed Mirror sailed by Dave Sumner. He beached her and made her level by placing fenders under her bilges. She had two fenders at the top of her mast, presumably for providing buoyancy in the event of capsize. I know from experience that Mirrors are notoriously difficult to right after capsizing. This is because they float high on their side and it is difficult for the crew to get a footing on the centreboard so that she can be righted.


Finally, Len Wingfield appeared on the scene with his Leader dinghy. He was perhaps the most experienced small boat sailor there. I had read several of his informative articles in the quarterly bulletins published by the Dinghy Cruising Association.


Soon after I had set ‘Micro’s’ anchor, Jay brought his Star Trekka alongside, and invited me to join him aboard his 'floating home'. I accepted his invitation. When I was safely aboard his boat he turned off the outboard. Slowly our boats drifted apart until Jay’s lay to her anchor.


For a full hour, in a smoke-filled cabin, we chatted about many things, including the complications of filming 'rush' shots on location. He told me a hair-raising tale about his experience aboard a large schooner when she rode out a Force 9 in the Bay of Biscay. He had done some pretty adventurous ocean cruising, including a crossing of the Pacific. Being a non-smoker, I was pleased when our conversation came to an end so that I could escape from the cabin and inhale fresh air again.


My return to ‘Micro’ brought disaster. Jay stationed his boat beside mine, and I foolishly leapt into her cockpit, with the result that I lost my balance and fell into the water! I quickly scrambled back aboard. I felt like burrowing my head in shame, but instead, I tried making a joke of it.


Meanwhile, my galley box, which had fallen into the water, was being carried away by the current. Jay tried to retrieve it. Inadvertently he ran the bow his boat over it, whereupon the box turned turtle and heavy objects such as the cooker and cutlery were swallowed up by the water to be lost in the mud below. Jay tried a second time to retrieve the box, but the bilge keels of his boat snagged ‘Micro’s’ anchor line. Somehow he managed to extricate his vessel by going astern without making the matter worse, which could have been the case, had the propeller become entangled with the anchor line.


Eventually, Keith Holdsworth rowed his boat to the disaster scene and retrieved my galley box. Thankfully, my digital watch continued to function, and miraculously, my wallet remained dry. I was grateful to those who had participated in the rescue mission.


The next morning, at low water, Len waded in deep mud to find my cutlery and saucepan lid. The only items that were lost for good were two lead weights that had become detached from the bottom of the cooker.


Later that evening, windblown clouds chased one another across a backdrop of twinkling stars and a crescent moon. I had a restless night, due to the shaking of the tent and wailing from the rigging of nearby yachts. I awoke early to find a grim grey morning punctuated with periodic heavy showers. In the dim light, ghostlike trees waved to and fro as the wind buffeted them.


I heard someone shout to another that the forecast was for a south-westerly wind gusting to Force 6. There would be rain at times and visibility would be moderate to poor. That was not a good prospect; therefore I decided to stay where I was, tucked in my warm sleeping bag. Low water would be at 0830, which meant I couldn't sail for at least another couple of hours. After breakfast and the usual ablutions, quite a few people waded through the mud to have a closer look at ‘Micro’. John Perry and Josephine Street came by car and trekked the final couple of miles on foot.


Because of the strong wind I felt that I would not be able to sail 'Micro' back to Redcliffe Farm. Instead, I would sail her downwind to Rockley Point Sailing Centre. John offered to meet me there and give me a lift in his car to Redcliffe Farm so that I could collect my road trailer. In the event, neither John nor Josephine would accept any money towards their expenses. I was extremely grateful for their help.


The sail to Rockley Point was exhilarating, but perhaps the most testing part of it was getting into the small marina. There was a shallow channel between moored yachts that I fastidiously followed. I downed the mainsail to reduce speed, but even the jib powered the boat at an alarming rate so that I had to take it down also. I then rowed 'Micro' towards the slipway. At the last moment I decided to manoeuvre the boat into a lee provided by a pontoon. This entailed rowing sideways to the wind while going astern. My strength was taxed to the limit, but I made it after a near miss with one of the yachts.


By 1600 ‘Micro’ was on her trailer ready to face the most dangerous part of the whole trip, i.e., the journey home! You'll be pleased to learn that no mishap occurred and that we returned safely.
Posted by William Serjeant at 10:03 pm

Bill,
It's amazing sometimes when you follow Youtube's suggested video links.
Well that's what I did tonight. Can you remember where you and Faith were on Sunday 11th May 2008?
Well you wrote about in in your blog and look what's here at 3:20
http://www.youtube.com/watch?v=3QuTmu8bJhI

How about that for 5 seconds of fame!

It surely was a memorable occasion to be there amongst those fabulous ocean racing yachts at the start of the Transat.