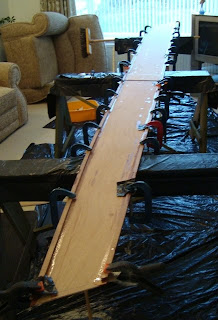 As usual, I was a little ambitious by thinking I could do more in a single day than was possible. I had hoped to epoxy the sheer strakes and chine logs to both side panels, but I discovered I did not have sufficient clamps to do the job; furthermore, I did not have enough space in the lounge to move around the panels while applying the epoxy and clamping the parts together.


Amazingly, I spent two hours and a quarter simply preparing things so that the operation would go smoothly without me spilling epoxy on the carpet. I thought I would need about 30 clamps and a corresponding number of pads for them. The purpose of the pads was to protect the outer surface of the panel from being damaged by the clamps. Each pad consisted of a small piece of plywood covered with brown sticky tape. The reason for the sticky tape was to prevent the pads from adhering to the plywood if epoxy came between them and the plywood. This could occur when the clamps are being tightened, because surplus epoxy could be squeezed from the joined items. It is important not to starve components of epoxy by over-tightening the clamps.


As a part of my preparation I made available four pairs of disposable Vinyl gloves for instant use. That was overkill, because I only needed one pair that I periodically cleaned with paper towels. Before the start, I adjusted every clamp to the required setting so that it would slip onto the bits being joined. The tricky part was keeping the pads in place when the clamps were being tightened. The action of clamping required three hands: one for holding the clamp, another for placing and holding the pad, and a third for tightening the clamp!


Because all the surfaces were flat, there was no need for me to mix Cab-o-Sil with the epoxy. In practice it is better not to use Cab-o-Sil if possible, because epoxy on its own is stronger than when filler is added to it.


After I did the job, I began to wonder if I had used the correct mixture of two parts epoxy and one part catalyst. To have a sufficient amount for completing the work I needed to pump each dispenser twice, but my doubt about the possibility of getting the mixture wrong was quickly expunged from my mind, because when I went to clean the brush I had used for applying the epoxy, I discovered its bristles were congealed together, almost into a solid state. When I checked my work four hours later, I found that the epoxy was rock hard.


Realistically, I should be able to epoxy together the various parts of the port hand panel tomorrow.
Posted by William Serjeant at 4:40 pm

<...so that the operation would go smoothly without me spilling epoxy on the carpet> (quote)

Do you know where I found epoxy the last time I did this ? on the silk lampshade, well over my head :-(
So be carefull, the penalties can be grave !

Did you see the little boat invented by myself, that I am constructing?

No? Me I look almost every day what you are doing on your beautiful Sharpy.

I talked again about your log on my blog. Look!

Thank you Fernando. I looked at your 'Friendship' boat that you have designed. Building her will be an interesting project.

I think you are right Bill!

After finishing the little "Joy", I think I will "play" the "Friendship".

I see that you had "shut" your beautiful "Sharpy".

Have a good day Bill!

Had you see this?

and this excellent exposition***** five stars