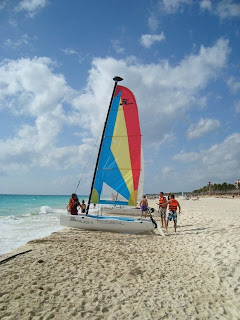 We discovered that the hotel had five thematic restaurants in addition to the buffet restaurant that was open most of the time. It too, laid on meals each day with differently prepared meals, based on cuisines from Japan, Brazil, China etc., plus the usual Western dishes with a wide variety of cooked foods, salads and sweets. Eating and drinking in moderation would be the problem, since all meals and drinks were inclusive. As there were many tempting foods we would not normally eat, we had to exercise a modicum of self-control.

Always, we were aware of the privilege of being able to choose from such a selection of tasty foods. Not many miles from our hotel there were shanty buildings beside the main road leading to Cancun where the occupants were less fortunate, by having to survive on a pittance and no doubt, in order to receive what little income they had, they were exploited by those who employed them. I have no facts or figures to substantiate my belief, except our visit to a Mayan village which revealed the poverty in which the inhabitants lived. (Details later)


In addition to the restaurants there were several bars, one of which was between the main swimming pool and the beach. There, all kinds of cool drinks were dispensed, and a beach service was also provided. Most entertainment during the day took place beside the pool, including an early morning invitation to join in gentle aerobics to which few responded, the majority of visitors preferring to sunbathe on the terrace.


On the third day of our visit I thoroughly checked out the Hobie Wave catamarans and I was not in the least surprised to find that two of the half dozen belonging to our hotel had deficiencies. Each of them had lose screws used for attaching rudder fittings to their hulls and one had a snapped chainplate on one half of the double plate, which meant the mast was being supported with a chainplate that could fail when placed under load. When I pointed out the deficiencies, those in charge of the boats produced a screwdriver and made the screws tight, but nothing was done about the chainplate. I resolved there and then that I would not sail on any of the Hobie catamarans. 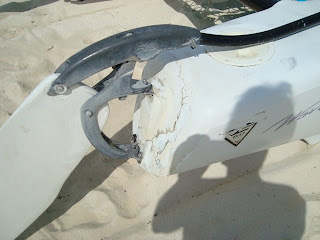 
A further inspection of other Hobie Wave catamarans based at hotels along that beach revealed even worse shortcomings. I noticed one that was being drained because substantial amounts of water had entered both hulls, presumably because of seepage between the rudder fittings. Two of them when being sailed were low on their marks, not just because of the weight of the crew, but because they were compromised by water within their hulls. It would appear that these boats had been handled by sailors who did not know how to manage them properly, especially when being launched off a beach. Often rudders would have been subjected to horrendous stresses when the catamarans were thrown sideways by breakers while their rudders were in contact with the beach.


Googling on the Internet reveals little about the shortcomings I have discovered and documented by photographing and videoing Hobie Wave catamarans that have frequently been launched off the beach south of Playacar. On the contrary, everything would indicate that owners are very satisfied with their boats, and not doubt the majority are. I would conclude that the conditions of frequent use off the beach by people unskilled in handling these catamarans is the main reason for the breakages, but for peace of mind, if I owned a Hobie Wave catamaran I would strengthen the attachments for the rudder fixtures.


Flying a hull on a Hobie Wave catamaran

The Hobie wave as well as the Hobie Bravo are some of the most durable and monkey proof catamaran designs out there. Of course someone always invents a better monkey...

Well, Hajo, there were a good many monkeys playing with Hobie Wave cats at Playacar! The boats were subjected to much misuse. On the whole, I suppose they proved themselves to be tough, but under those conditions of frequent use off an open beach, the rudder fittings gave up on several of them.

Most of the water seeping into my Hobie Wave are from two ports underneath the seat cover. As one sits on those two weak covers, they are difficult to be kept water-tight and must be resealed after a couple seasons.