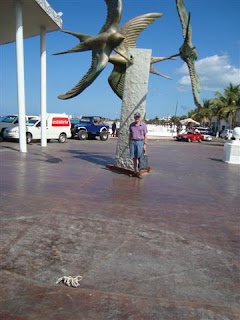 Outside the Cozumel Ferry Terminal

This was the day we set aside for taking the ferry from Playacar to the island of Cozumel. The weather was hot and almost windless - ideal for the crossings which lasted 45 minutes each way. The most convenient method of getting to the ferry was by walking along the beach from our hotel.


The economies of places like Playacar and Cozumel are highly dependent on revenue from tourism; therefore most things are geared to encouraging visitors to part with their money. Passengers on the ferry were no exception. They were a captive audience that could be subjected to visual and audio input via a large video screen and amplification system advertising hotels, restaurants, scuba diving, luxury catamaran sailing, jet skiing, parasailing, car and scooter hire etc. We wanted none of these things. 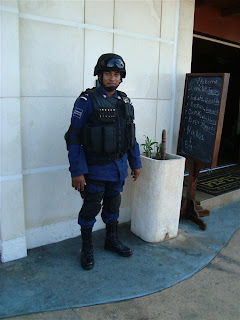 From the moment we stepped off the boat we were invited to enter almost every shop we passed, to buy wares, articles of clothing, trinkets, jewellery, craft items, food, shells and many other pieces of tat. Being hassled in this way was not a pleasant experience. We found a short respite when we sat down in a McDonalds for chips and Coke. From the veranda we overlooked a jetty where there were two glass bottom boats used for viewing coral reefs, of which there were several bordering the south-western side of the Island. 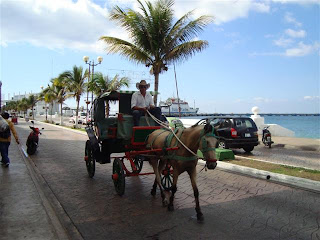 My wife has a small collection of shells, and she was on the lookout for another shell to add to her assortment. We found two stalls where they were being sold, and one of them looked promising, but the price asked for the shell my wife fancied was outrageously high. No amount of bargaining brought about a sale; however, bartering at the other stall resulted in a good deal being done on a shell that was nearly as attractive as the one she had wanted.


Walking around the market places in the hot sun took its toll, and we were pleased when we found a Starbucks café where we had coffee and a light snack, before heading back to the ferry terminal. On the return passage our boredom was relieved by a conversation with an American lady from North Carolina who was passionate about scuba diving. Normally she dived with her husband, but for the very first time she was taking a break away without him. She had a very demanding job that required much travelling around the world, and she desperately needed a complete rest to unwind and rebuild her strength. Consequently, she had decided to stay with a lady friend who lived on the mainland. 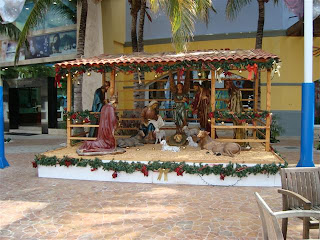 
We told her of our disappointment with Cozumel and she said that she had been there on numerous occasions for diving. If we knew where to stay, and the better parts of the Island, she insisted we would like it.


Back at our hotel, we cast aside our disappointment with how the day had panned out, and we enjoyed a sumptuous feast at the buffet restaurant.
Posted by William Serjeant at 11:22 am

Volney said...
This comment has been removed by a blog administrator.
10:09 pm