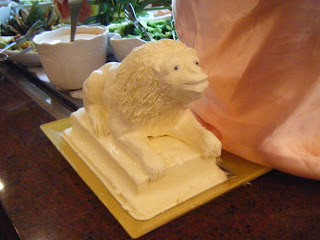 We were not inspired to do a great deal on our 12th day. The weather was mainly dull and windy, but it did brighten up a little about mid-afternoon.


In the morning we walked to the shops at Playacar and bought tee-shirts for our grandchildren and great grandchildren. My wife also bought a few small shells for one of our daughters - at her request to decorate her bathroom. After lunch we tried using a phone card for making calls to the UK, but we could only raise engaged tones. 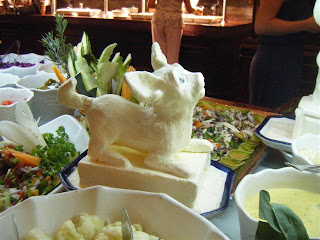 A dog? A cat? Definitely an animal!


As usual in the evening, there was a wide choice of foods at the buffet restaurant, and the presentation was first-class. I particularly liked the butter sculptures - that’s what I think they were. These pieces were at their longest dimension about a foot long, wide or tall. They were carved and modelled in a medium that may have been a form of butter, lard or cooking fat.


We took a post-prandial walk to a good quality silver jewellers which was approximately a mile-and-a-half from our hotel. My wife found some pieces that interested her and she did a deal for a pair of earrings to give to one of our daughters. 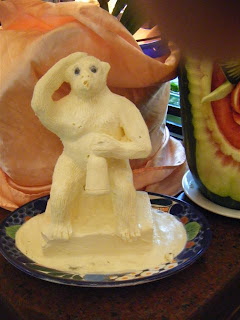 
There was never a problem with walking the streets at night in the vicinity of the hotels. On the news at home, we had heard of murders, muggings and problems with drugs in Mexico - even gun battles between the police and gangs, but wherever we went we saw nothing of the sort. We felt completely at ease. At some shops with expensive items for sale there were uniformed security guards, and in places where there were crowds of tourists we always saw at least one armed policeman. Having a high profile security presence must be a deterrent to would-be criminals.
Posted by William Serjeant at 8:03 pm