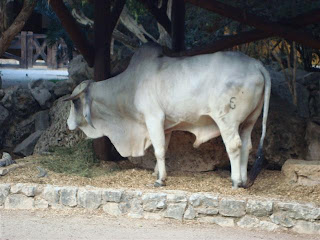 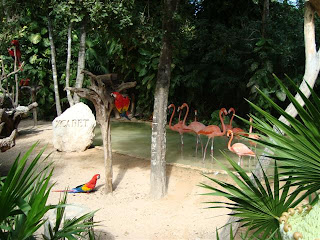 This was the day set aside for our visit to Xcaret Eco Park and swimming with dolphins. Everything would be provided, including towels. The weather was sunny and hot. We were excited about our forthcoming encounter with dolphins, but to our surprise only one place had been booked, due to a misunderstanding by the Thomson rep. He had assumed that my wife would not want to go in the water, as she mentioned she was a non-swimmer, which is not exactly true. She can swim, but she is not a strong swimmer. We had discussed the option of her going in the water for contact with the dolphins without participating in the swimming, and there was provision for it to take place. However, when we presented our ticket, we were told that only one person had been paid for to go in the water and that the event was fully booked.


Before my wife went in the water, there was a prep talk about what was planned to take place and how one should inter-react with the dolphins. There were a certain number of tricks they could perform, the most spectacular being to propel a swimmer over the surface of the water. The swimmer faces down on the water with his hands and legs splayed out, and two dolphins place their snouts on respective soles of the swimmer’s feet, then the dolphins accelerate so that the swimmer planes over the surface of the water. Other tricks they do include swimming around a group of people standing in shallow water, slapping their tails on the surface of the water, leaping out of the water and passing over a row of people standing in it. They also kiss the cheeks of willing participants. My wife enjoyed being kissed.


The taking of photos by spectators was not forbidden, but unless one had a camera with a telescopic lens, obtaining close-ups was impossible. My photos and videos of the event do not do it justice. We could have bought photos taken by professionals at the dolphinarium but they were excessively expensive. We could also have purchased a CD with videos and photos; however, the cost did not warrant doing so.


We were a little disappointed with Xcerat Eco Park because several of the animals did not look happy. The jaguars displayed signs of stress by repeatedly walking to the edge of the moat that penned them in, and the manatees were almost motionless trapped in the confines of a shallow water basin. There were only a handful of monkeys that we could glimpse between the foliage. Other animals were kept in small enclosures, except large lizards which appeared in places throughout the Park. They looked to be in good shape. Sadly we saw few butterflies in their netted enclosure.


There was a lot more to the total experience of the Park, including a buffet lunch, a horse show at which riders demonstrated their skills by doing things like handling a lasso, placing picks into stuffed bags mounted on a mobile three wheel barrow fitted with horns to represent a bull at a bull ring, and making their steeds perform actions such as rearing, rotating on the spot and trotting diagonally. The biggest attraction was an evening theatrical presentation involving hundreds of actors who took part in a number of scenes representing the history of Mexican civilization. It was a spectacular colourful show, spoiled to an extent by the excessive volume of accompanying dramatic music and dialogue in Mexican which I could not understand.


We liked the craft areas where artists and craftsmen displayed their wares for sale. Their wood carvings were exceptional, being far better than most of the usual junk produced for tourists.


It was a long day, but we arrived back at our hotel via a taxi in time for a late dinner.
Posted by William Serjeant at 8:35 am