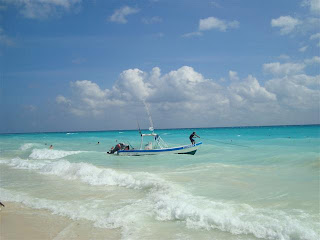 
When you are spending time on the beach, the weather is all important. We noted that the wind was stronger than on previous days and there were quite a few clouds about. Instead of coming from the northwest the wind was from the east, directly onshore. This made it tricky for those sailing the Hobie Wave catamarans because they had to overcome the surf and the swell while beating offshore. Conditions were also tricky for those managing dive boats. To get their gear and divers onboard they needed to anchor their boats close to the beach, where the waves were steeper and often breaking. I noted that their fisherman type anchors were directly attached to warps, with no chain. Presumably this was to make it easier for deploying and retrieving the anchors. 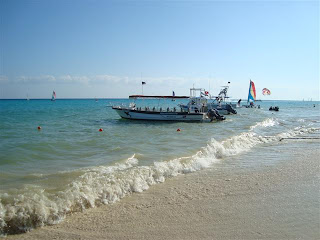 We had a pretty relaxing day sunbathing and watching the activities which included parasailing and jet skiing. The yellow flag indicated it was safe for swimming, and a number of people tried a bit of surfing with boards.


Dive Boat
Posted by William Serjeant at 11:55 am