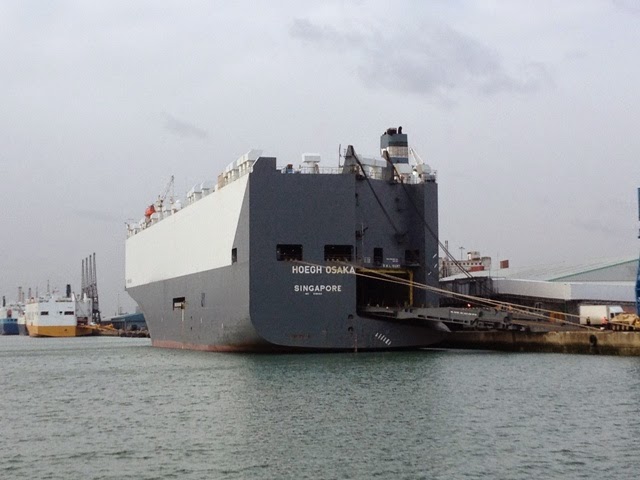 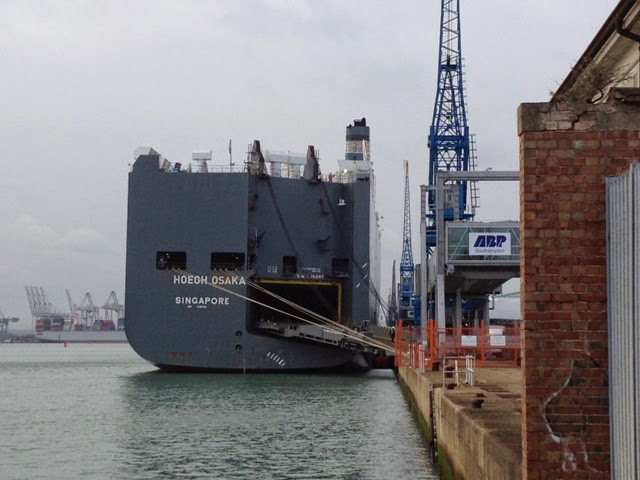 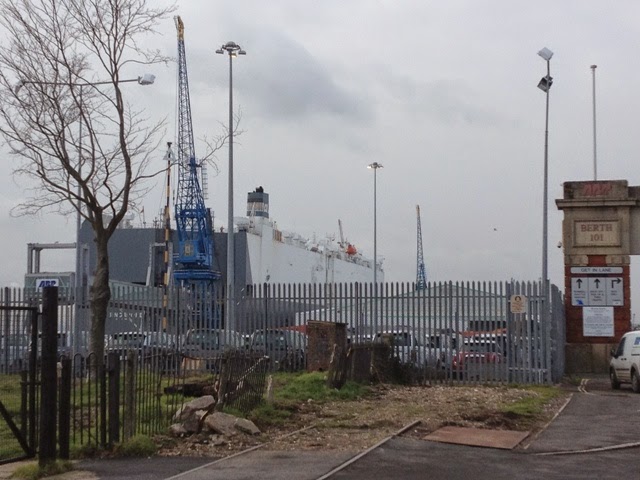 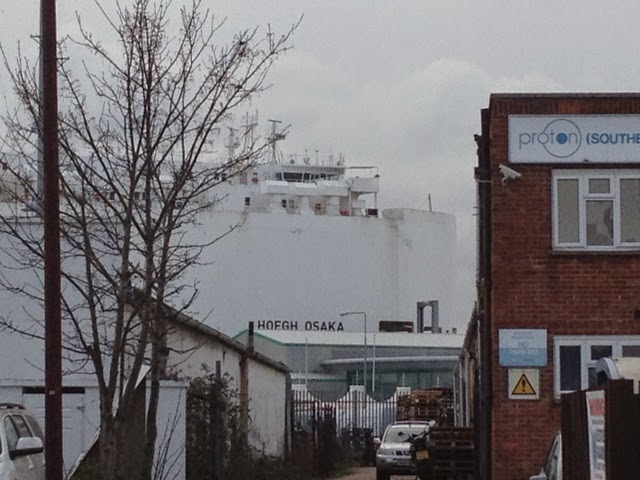 While at Southampton on Thursday, 5th February, 2015, I took these photographs of the Japanese car carrier ‘Hoegh Osaka’. She was in the news on 3rd January when she was deliberately run aground on the Bramble Bank. For reasons yet to be fully explored by the Marine Accident Investigations Branch, she developed a severe list to starboard. It would seem that the master of the ship and the pilot jointly decided to run the vessel aground to prevent her from listing further.

Because of the hazardous situation, 25 crew members were taken off the ship by helicopter and RNLI rescue craft.

She was carrying a precious cargo of more than 1,400 cars; Jaguar Land Rovers, Hyundai and Minis. There were also a number of JCB vehicles.

After being stranded on the Brambles Bank for 4 days she unexpectedly re-floated, and she was taken to the Alpha Anchorage between East Cowes and Lee-on-Solent. From there she was moved to Berth 101 at Southampton Docks. When I saw her she was fully righted, and beside her in the dockside compound there were many cars.

She is shortly to set sail for Falmouth under her own power where she will remain for two or three weeks for undergoing repairs to steel works and hydraulics.

She is scheduled to return to Southampton for taking on the original cargo, apart from damaged vehicles. She will then set sail for Bremerhaven in Germany, which was the intended destination before the incident.

Hoegh Osaka - pumped out and readying to move
http://www.pbo.co.uk/news/hoegh-osaka-pumped-ready-move-18474

At least the Rolls-Royce didn’t have a scratch
http://www.dailymail.co.uk/news/article-2932885/260-000-luxury-car-looks-pristine-s-driven-stricken-cargo-ship-unlike-hundreds-battered-Land-Rovers-went-it.html


http://en.wikipedia.org/wiki/Marine_Accident_Investigation_Branch
Posted by William Serjeant at 10:03 am

I saw her leaving the Solent this afternoon. Work was a bit slow and I had the afternoon off for a bit of boaty fun.

Car carriers are pretty common in the Solent, but it adds a bit of interest if you see a ship that's been in the news.

You are right Steve. I'll have to change it. Thanks.

Thanks Mark for updating us on her departure.