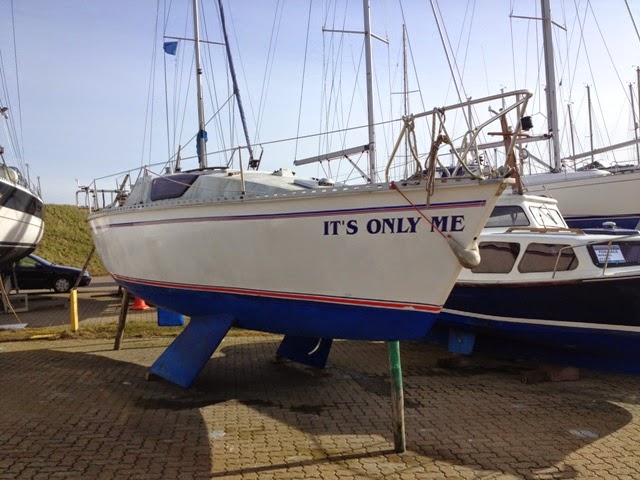 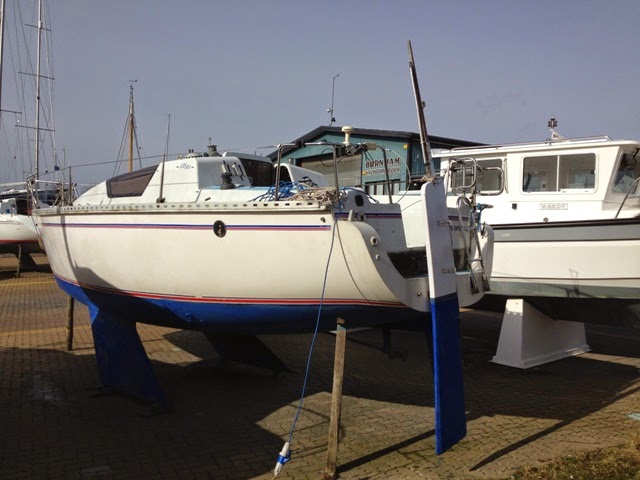 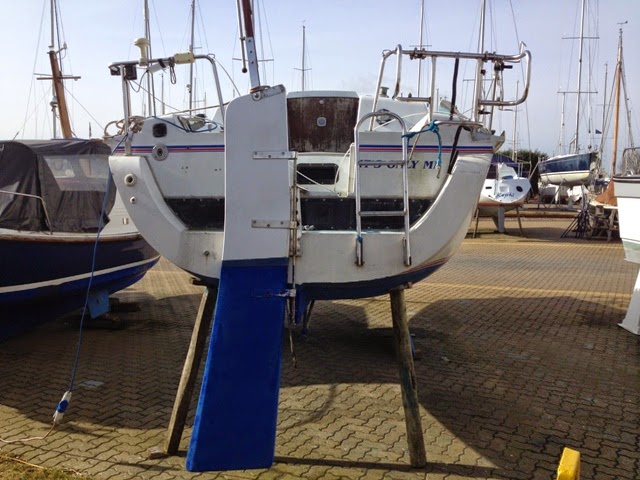 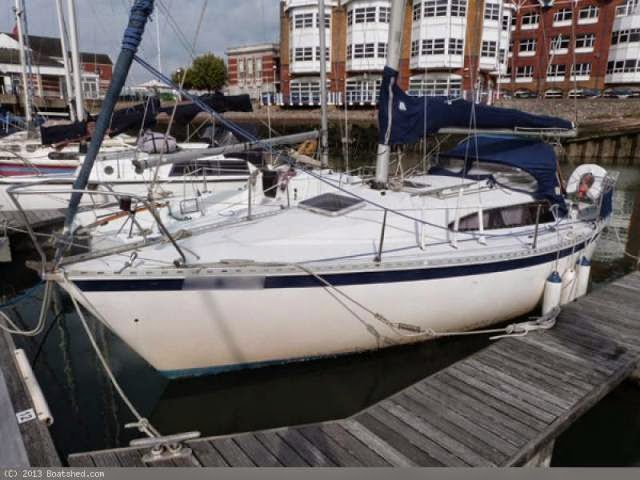 At 26’ 10” LOA the Gib’Sea 76 is 10” longer than her less attractive predecessor, the Gib’Sea 77. I say less attractive in an aesthetic sense, because the unique smoked Perspex ‘wrap-around’ windows of the 76 look to me much prettier and more functional than the standard semi-pointed side windows of the 77. Another advantage of the longer boat is that she has the added privacy of a well-illuminated aft cabin. Take note of the long rectilinear window built into the transom for providing light in the aft cabin. There are more ports for this cabin either side of the companionway that are not visible in my photos. She has a removable washboard in the transom that gives easy access to a fold-down stainless steel boarding ladder.

The Gib’Sea 76 was in production between 1984 and 1990. She was designed by Groupe Graal for boat manufactures Gilbert Marine. Prospective purchasers could choose between buying one with a fin keel, drop keel, or with twin keels. The drop keel version had a draught of only 2’ 7” when fully raised, but for clearance at that depth, her rudder had also to be raised to the maximum setting.

Quite a lot of thought went into the functional aspects of the boat; for example, notice the neat shaping of the starboard pushpit for mounting a lifebuoy, and the full length alloy toe rails for keeping the crew safe when doing deck work. Although not shown in my photographs of ‘It’s Only Me’, she  is fitted with a furling Genoa. Her two-bladed folding prop and shaft are supported by a ‘P’ bracket. She is most probably powered by a Volvo Penta 9 HP diesel engine mounted in a soundproofed compartment. Not many boats of her size have six berths: a double ‘V’ up forward, two settee berths in the main cabin, and a large double in the aft cabin.

Her lines indicate that she has a good turn of speed, and if her interior is identical to the one illustrated by photos in the archives* of Yachtsnet. co. uk she is indeed a comfortable boat.

Looks like one of the many good little bilge keelers that are so suited to shoal water sailing. I really like the idea of being able to haul out without having to rely on a cradle - the boat just sits upright and you can scrub and paint without banging the old head!

Bill careful what you say about the better and prettier 77 -personal opinion of course. Having raced both boats the Gibsea 77 fin is quicker in the right hands. The gibsea 77 has won the family trophy in the round the island race. 3rd in class and 13th overall.
The 76 is different with those windows that let great light in but also its achilles heel . very expensive to replace as a custom 3d mould and also make the boat look smaller than it actually is. loads of room inside both, tardis like, bigger toilet in 76 both will fit larger people. The 76 has removed the front cabin and fitted an aft one at the cost of beam and not such a good seating/sleeping area.( no sea bunk) dont get me wrong they are both great boats and easy to sail. bigger boats are back breaking and have heavy sails. However its about sailing the 77 wins as it has a bigger cockpit better for sleeping crew, hence I moved to the 77 as it suited racing. Race laminates look great on the boat and bought them from Arun Rockall. Perhaps we should get gibsea's to meet at this years round the island race especially 76's and 77's, 262s, 28s,282, 242s 21s, 7.7s etc. enter cruiser B.