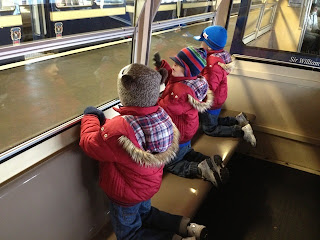 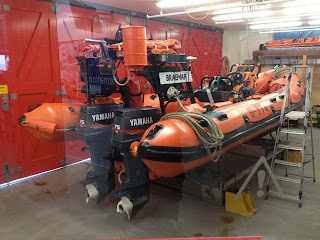 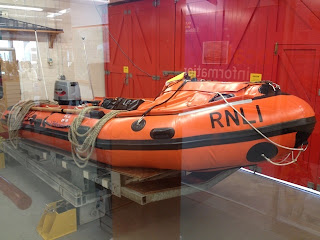 Last Wednesday my wife and I took our grandchildren to Southend Pier for a ride on the train to the Lifeboat Station at the seaward end of the pier. The 1.33 mile long pier is reputed to be the longest in the world, but I believe it is, in fact, the longest ‘pleasure’ pier in the world.
The boys loved the train ride, but it was just as well that they were appropriately dressed for the bitterly cold wind they experienced when alighting from the train. The café was closed because of an electrical fault, and the only place where we could seek shelter was at the Lifeboat Station. There we found others sheltering from the wind until the next returning train.
A souvenir shop adjoining the lifeboat boathouse was a hit with the kids. They weren’t in the least interested in the Atlantic 75 and the Offshore D-class lifeboats that had recently been in action. Altogether, last year, Southend lifeboats were launched 137 times!
Since 1879 Southend lifeboat crews have saved over 2,000 lives. All the work today is done by a team of 40 volunteers, and they even operate a rescue hovercraft.
Links
Southend Lifeboat
http://southendlifeboat.org/
Southend-on-Sea Lifeboat Station
http://en.wikipedia.org/wiki/Southend-on-Sea_lifeboat_station
Southend-on-Sea Lifeboat Station
http://rnli.org/findmynearest/station/Pages/Southend-on-Sea-Lifeboat-Station.aspx
Southend lifeboat station named busiest in country in 2012
http://www.echo-news.co.uk/news/local_news/southend/10180691.Southend_lifeboat_station_named_busiest_in_country_in_2012/
Southend Pier
http://www.southendpier.com/
Southend Pier
http://www.southend.gov.uk/pier
Southend-on-Sea | The Longest Pleasure Pier In The World
http://londoniscool.com/southend-on-sea-the-longest-pleasure-pier-in-the-world
"Longest Pleasure pier in the world"
http://members.virtualtourist.com/m/980ba/4a859/
Posted by William Serjeant at 11:13 am