A Jackdaw of Memories 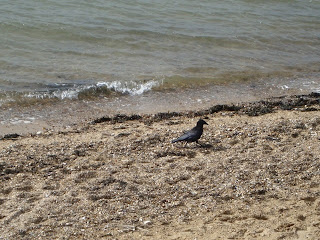 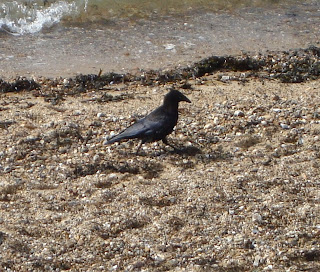 Scavenger at Thorpe Bay
When I was first into my teens, a friend had a jackdaw as a pet. His father reared the bird from when it was a chick. The unfortunate creature had fallen from the nest, or perhaps it had been thrown out by mum or dad. Maybe his brothers and sisters no longer liked his company.
Jack, as he was called, lived in a homemade, wooden and wire mesh cage that had a boxed section at one end where he could rest or sleep on a perch. At the other end of the cage there was a feeding tray and a space where he could strut and hop. Two more perches, one higher than the other, completed his playground. Almost every day he was taken out his cage and he was allowed to roam around the garden. Needlessly the tips of his wings were clipped to dissuade him from flying away, but as far as I was aware he had no inclination to scarper.
Jack would always respond when spoken to. His repertoire was somewhat limited, but he would say, “Chack, Chack,” over and over again. He quite liked a cuddle and would come when called, especially if tempted with a morsel, a worm or a sprinkling of grain. I would feel sorry for him when other jackdaws flew overhead, completely free to come and go, and yet he never seemed interested in them. I think he thought he was fully human, just like his adoptive dad and the dad’s son who was like a brother to him. He saw me as his friend, the one who liked to stroke him on his nape.
Jack would never mate and build a nest of twigs lined with grass, sheep’s wool, horse hair and moss. He would never find a partner for life, as his brothers and sisters. He would never feed his chicks, see them grow and see them make their first faltering flight. He would never join the wheeling throng; twisting, diving, soaring, racing, or engage in banter while roosting in autumn trees.
If he had not been found by my friend’s dad, feeble, tiny chick that he was, he would surely have died. As it was, he lived for many years, and I was truly sad when I heard that he had been buried at the bottom of the garden. At least there, he could rest in Valhalla with other pets that had gone that way: three gerbils, two mice, a tortoise and a rabbit. The chickens never got that far; after a lifetime of laying eggs, they were strangled, their necks broken, feathers plucked, roasted and eaten.
Links
Western Jackdaw
http://en.wikipedia.org/wiki/Jackdaw
Jackdaw
http://www.rspb.org.uk/wildlife/birdguide/name/j/jackdaw/index.aspx
Jackdaw
http://www.garden-birds.co.uk/birds/jackdaw.htm
Jackdaw (Comprehensive information here)
http://www.newworldencyclopedia.org/entry/Jackdaw
Jackdaw
http://www.birdsofbritain.co.uk/bird-guide/jackdaw.asp
Posted by William Serjeant at 8:14 pm