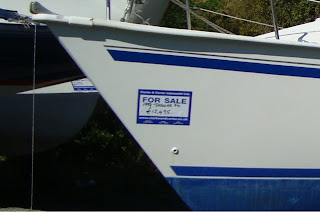 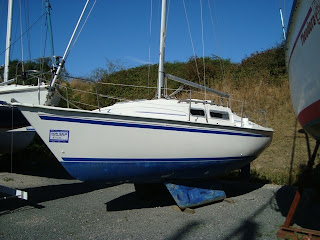 Not so long ago I saw a bilge keel Jaguar 24 for sale at Clark and Carter at their Burnham-on-Crouch Yacht Harbour office, and according to their website she’s still for sale at £9,950. She was £12,495!
A 1997 boat with 4 berths in two cabins and 5’ 9” maximum headroom might represent good value for money.
She has a 2-cylinder 9.9 HP 2010 Johnson outboard mounted in a well in the cockpit. A Hood Seafurl 705 headsail system will make handling her a doddle. She comes equipped with an anchor, chain and warp, a stainless steel transom mounted boarding ladder, a spray hood cover, mainsail cover, named dodgers, mooring warps and 6 fenders.
‘Jisme’ has the usual electronic gear, a VHF radio, an echo sounder, a speed/log, wind instruments and navigation lights. Her cast iron twin keels were professionally removed, re-bedded and refastened with upgraded fittings in 2012.
She looks like a pretty clean yacht in nice condition. I don’t covet her, but if I had the money to spare I would go along and have a look.
Links
Clark and Carter
http://www.clarkeandcarter.co.uk/
Jaguar 24 for Sale at Clark and Carter for £9,750
http://www.clarkeandcarter.co.uk/brokerage-boats/index.php?type=Sail&keel=Twin+Keel&make=Jaguar&model=24&minprice=&maxprice=&minlength=&maxlength=&SimpleSearch=Search+Boats+for+Sale
Full details of the above Jaguar 24 can be found by downloading this hefty PDF file
http://www.clarkeandcarter.co.uk/brokerage-boats/siteimages/full-pdf.jpg
Some nice photos of ‘Isme’
http://www.clarkeandcarter.co.uk/brokerage-boats/searchfullspecs.php?DocumentID=4037569
Another Jaguar 24 at Plymouth for Sale £9,500
http://www.boatshop24.co.uk/advert/jaguar-24-wier-quay/38600390
Yet another Jaguar 24 for Sale at Plymouth £10,850
http://www.networkyachtbrokers.co.uk/boats_archive/Jaguar_24_Yacht_For_Sale-10881.html
Posted by William Serjeant at 7:40 pm