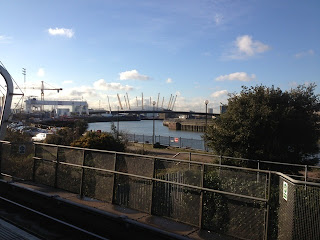 Last Wednesday morning I had cause to be on the platform at East India DLR station, and the view overlooking the River Thames towards the O2 arena reminded me of when I first visited London.
I was sixteen at the time, and having lived a somewhat sheltered life in rural Somerset, the big city, known as Smoke, was a bit of a shock. The approach was by train on the Great Western Railway, terminating at Paddington. I was with my brother who was reading theology at Kings College. I told him I did not like the big city which was crowded and dirty. I couldn’t understand why so many people were crammed together in terraced houses, street after street. He wanted to show me Cable Street where, nearby there was a tiny house in which two Franciscan friars lived. The road was a real dump. People were standing around chatting, and it felt somewhat threatening.
Inside the terraced property there was a room that had been converted into a miniature chapel. Within it there was a wooden table, on top of which was a wooden cross. Half a dozen upright chairs completed the furnishings. A bible was open before the cross. Only one friar was there to greet us. He welcomed us into the living room, which was in effect a kitchen with a table, a couple of chairs and a settee. The doorway through which we came led directly to the street. Beside the door there was a small sash window almost hidden by dark curtains that did their best to keep any light out.
My brother and I relaxed on the settee while the friar made tea. At that moment there was shouting in the street. Pulling a curtain aside, the friar took one look through the window and said, “Stay put.” He calmly went outside, and within seconds brought a young man in and sat him down on one of the upright chairs. The distressed youth was bleeding from a wound on his forearm. We gathered he had been involved in a fight outside the house. The attacker, still wielding a knife, fled after the friar bravely intervened.
Our host carefully washed the wound and dressed it with strips torn from a pillowcase. He then made a fresh pot of tea. All four of us sat together with few words spoken, until the one who had been wounded felt it was safe to leave. My brother and I gave it ten minutes before we left too.
I have other memories of my short visit to smoky London, but that was the most vivid. I marvelled at the bravery of the gentle friar who was dressed in a brown robe. Around his waist there was a threefold knotted rope to remind him of his vows of poverty, chastity and obedience.
Links
Friars and Monks
http://en.wikipedia.org/wiki/Friar
Cable Street
http://en.wikipedia.org/wiki/Cable_Street
The O2
http://www.theo2.co.uk/
Smoke, or The Old Smoke
http://www.guardian.co.uk/notesandqueries/query/0,,-196814,00.html

Posted by William Serjeant at 4:59 pm