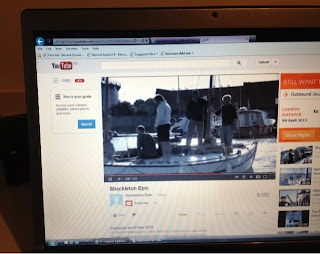 I mentioned this extraordinary adventure in a previous posting.*
Tim Jarvis and Barry Gray, along with support man Paul Larsen have just completed their hazardous crossing of South Georgia. After rowing and sailing 800 nautical miles with three other crew members from Elephant Island, Tim and Barry were faced with the challenge of scaling mountains and crossing crevasses to reach the old whaling station at Stromness. 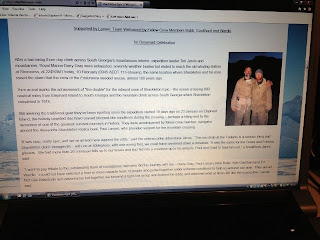 All of this was done with the men wearing clothing and using equipment identical to those of Shackleton’s party almost 100 years before whilst on their survival mission to seek help for those left behind on Elephant Island .
Nick Bubb, Seb Coulhard and Ed Wardle, the other crew members of the 22.5 foot replica lifeboat Alexandra Shackleton were highly praised by team leader Tim Jarvis. He and his team had experienced cramped, wet and freezing conditions during the 800 nautical miles voyage. At times the swell was eight or more metres and winds reached speeds of 50 knots.
Congratulations to them all.
* ( http://bills-log.blogspot.co.uk/2013/01/topical-maritime-happenings.html )
Links
Shackleton Epic Expedition
http://shackletonepic.com/
Shackleton Epic
http://www.youtube.com/watch?v=QZ2oKdS6KSs&feature=player_embedded#!