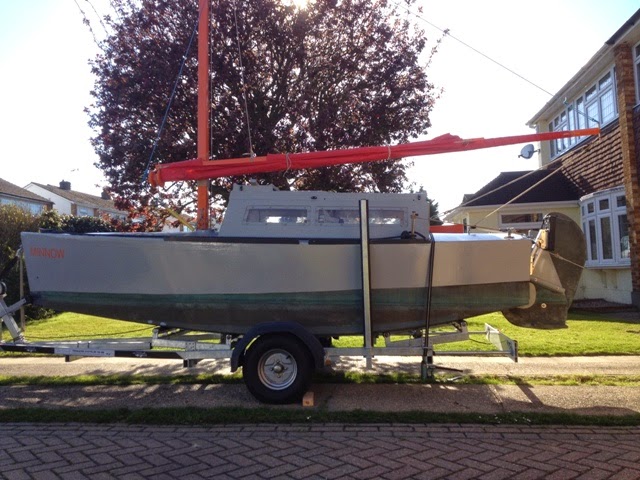 There is a certain tinge of sadness as I see ‘Minnow’ on the driveway ready for her new owner to collect tomorrow. I am reminded of how she came in a bedraggled state and of the work I did to bring her to her present condition. About this time last year she and I were to set off on an adventure, but after a couple of days together I knew I was not up to the job. Things didn’t go well, and I made several mistakes – bad judgments that could have resulted in something serious happening. I won’t go into detail. Suffice it to say, I made the decision to return home. From that time I’ve somewhat lost the desire for long-distance solo cruising. Readers of this blog suggested I should not sell ‘Minnow’, but give time for a change of heart. I took the advice and I did not put her up for sale immediately. As the year went on, it became increasingly obvious to me that I had made the right decision to sell. Several people took an interest in acquiring ‘Minnow’ – some for sure were dreamers. I had enquiries from as far as Australia, and others from Germany, France and Scotland. Closer to home, there were those who came to see the boat, of whom one really had it in his heart to have her. I’m pleased that he has succeeded. She has been his for some time while she spent the last days of winter in the garage. Tomorrow he is due to collect her.

Now a boat is not like a car. When you sell a car you say bye-bye and that’s that. With a boat it is different. A boat has so many characteristics and her owner knows how best she can be managed. He learns this by association with her. Therefore, when she is taken by another, the previous lover wants the very best for her and her new master. He cannot see her go without telling how best to have a working relationship. To that end I usually make a list of observations and advice for the new partner to help things get off to a good start. Below, you can see these, ‘Thoughts Re. ‘Minnow’. They apply to her, but some observations may be useful to owners of other Matt Layden Paradoxes.

Trailering: Periodically check that the lighting board is held in place by the turn screws. They can vibrate loose. Taping them might not be a bad idea. Make sure the boat is bow heavy before taking to the road. Don’t forget the bow lashing and the aft strop.

Rigging: Do not unhook the trailer when setting up the rig.  Alternatively jack up the aft end of the trailer before rigging.  This will stabilize the trailer. Attach the pennant to the top of the mast, unless you want a quiet night, because, if there is any wind, it rattles.

Launching and Retrieving:  Make sure the lighting board is removed before launching. Use the thick warp tied to the ball hitch and the trailer to obtain sufficient depth for ‘Minnow’ to float off. You can chock her on the slipway so that the trailer can be separated from the car. (Make sure there is plenty of weight in the bow before unhooking, otherwise the boat may fall back on her rudder.) Move the car up the slipway. Tie the rope to the trailer and the other end to the ball hitch. Drive a short way up the slipway; move the chocks, and slowly reverse until there is enough water under the boat to float her off. Don’t forget to have the anchor line ready for securing the boat before the trailer is withdrawn from the water.

Making Sail: Get the furled sail topped up before hoisting it. When hoisting the sail, make sure the yard does not get caught under the topping lift. Use gloves when handling the running rigging.

Sailing: Try not to allow the sheet to become too slack, otherwise it may catch on the aft cleats or the engine. When tacking from starboard tack to port tack make sure the boat has plenty of momentum to take her round. If the water is choppy it may be better to wear ship. Therefore judge the situation in advance to make sure you have room for wearing ship. When on the wind do not pinch – sail a bit free. She sails best to windward when the windward chine runner is just clear of the water. You’ll need a Force 3 for this.

Rudder: Unless sailing in shallow water, always keep the rudder fully down. You might need to push it fully down. Never use more than about 15 degrees of helm – particularly when tacking, because she must be sailed around in an arc without losing too much way.

Trim: Make sure there is enough ballast up forward to submerge the foot of the stem about 3 inches. When trimmed properly the bottom of the transom should be level with or just above the surface of the water.

Engine: When starting cold, use about half choke. Start the engine in the raised position for getting a good pull with the cord. Then immerse the prop to allow cooling water to flow. Gradually reduce choke until the engine is running smoothly. It may be possible to idle the engine so that the prop stops rotating. (I have had difficulty doing this. Perhaps the carburettor needs cleaning.) Use unleaded petrol with no oil. The engine can always be kept in the upright position – either up or down. This way the sheet can be kept clear. Bungees can also help prevent the sheet from snagging the engine. There is a plug spanner and a spare plug in a tray in the lazarette.

Petrol: Take the greatest care. Make sure the lids of the cans are secure. Use the funnel and its bungee when filling the engine tank.

Yuloh: You can use the little bungee to help keep the yuloh on the pin. Raise the rudder out of the water when yulohing.

Aft Vent Hatch: With the present sheeting arrangement, the hatch must remain closed.

Anchoring: It is best to keep the anchor in a large bucket or watertight plastic container, along with its chain and warp. Keep them out of the way in the cabin, forward on the starboard hand side, ready for deployment. When deploying or retrieving the anchor, lash the bucket or container to the aft deck by the yuloh blade. From there the anchor can be lowered or raised. When retrieving the anchor, flake the warp into the bucket, then the chain, and finally the anchor. Cleaning the warp and anchor is best done with a loo brush as they are being raised. This way, mud and weed are kept out of the boat.

Rough Water Sailing: Before going to sea, I would advise you make a rubber or vinyl baffle for the tiller port. (See attached photos showing how Jim did this for ‘Faith’.)

Battery: This is excellent. It should remain charged by being topped up by the solar panel. It is maintenance free.

Tiller Extension: I sometimes prefer using it to the steering lines.

Note: I’m looking forward to transferring custodianship to the new owner -More about that tomorrow.

Posted by William Serjeant at 7:56 pm


Best of luck tomorrow, for both you Bill and the new owner of Minnow.

Yes, the end of one chapter and the beginning of a new one for both of you. Wish I'd bought a boat from you Bill!

Thank you. Anyone who has bought a previously owned boat from me has received her in a better state than when I bought her. Hence, had you bought one from me you would have been the beneficiary. Likewise, anyone who bought a boat I built from scratch would have known she was the very best I could have built according to the limits of my skills and materials used. When I look at boats built by far more accomplished and skilful people, I'm amazed at their standards, and I wish I could have done as well.
Cheers,
Bill.

A fair wind is a bonus, and fun is a reward.