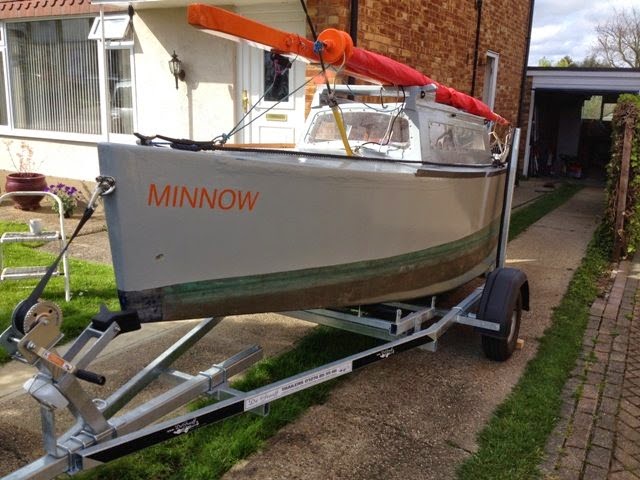 ‘Minnow’ is a Matt Layden Paradox, shallow draught, sailing beach cruiser designed for one person. The original ‘Paradox’ was sailed for thousands of miles by her designer, many of them while exploring the Bahamas and the Everglades. Several Paradoxes have been built and sailed by enthusiasts in various parts of the world. Here in the UK there are 4, one of which is for sale, namely ‘Minnow’. She is a standard Paradox, except for the upper structure of her cabin above deck which has separate side windows, and at the rear there is a removable washboard to facilitate easy access for her solo crew.


I placed a ‘For Sale’ advert* at Ebay.co.uk which immediately brought a favourable response with several enquiries. Since then there have been 1,238 viewings of the advert, and Ebay watchers have grown in number to 40! There are 7 days left for the advertisement to run. In addition to the interest shown via Ebay, there’s been an exchange of emails between me and other parties amounting in total to 56. There are 7 people who have shown a persistent interest in ‘Minnow’, out of whom 3 are devising means of acquiring sufficient money to buy her. Two people have actually looked at her, and both liked what they saw; one is trying to find funds for acquiring her.


The above seems to sum up the situation. There are many dreamers who would become doers if they had the money. People are feeling the pinch because of the high cost of living. Until the economy improves, boats will be advertised for sale, but few will be sold, even at bargain prices. ‘Minnow’ is going for a song! All it needs is for one person who has the dosh to acquire her. Are you that person? Procrastinate, and your chance could be lost.

Hello Bill, you are quite correct. Procrastination is the thief of time, as my late and lovely sister-in-law once told me.
It'd unlikely indeed that I'll raise the financial steam to purchase 'Minnow' in the time left. What I would beg of you is to give my contact details to whoever does manage to buy her, in the event of him or her selling her.

I am surprised someone hasn't bitten your arm off at that price. I was very tempted myself, but my wife thinks that two Paradoxes is overdoing it a bit.

To anyone dithering I say do it, you won't regret it.

I would like you to have her, but I can't give her away. I'm hoping to cover my costs and to have a bit more for my labour. That seems fair to me.

What is important is that she goes to someone who will make good use of her and look after her.

You can only sail one at a time!

I think your wife is right in thinking that one mistress is sufficient. She, i.e., your wife, wouldn't want you to overdo it.

Hello Bill, I'd never suggest you gave me 'Minnow'. In fact, I wouldn't dispute a cent of the price. Should I find myself able to buy her, you'd get the full £2900 for her.