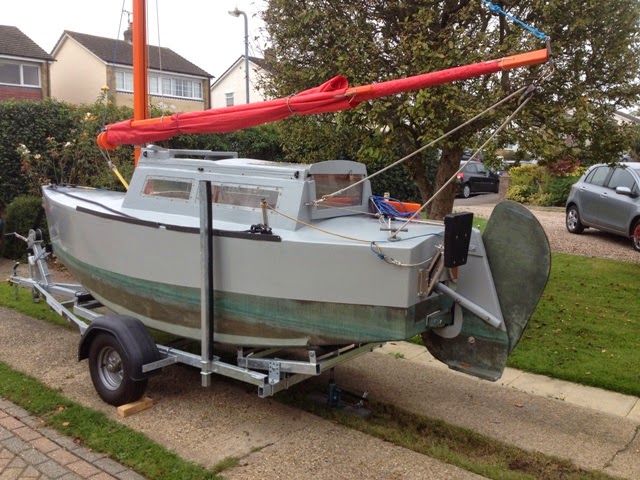 Continuing the riddle of the paradoxical Paradox, there is more to it than meets the eye. In yesterday’s Comments Section Brian drew attention to the role of the extraordinarily large rudder. That is true; the rudder acts in part as a keel for providing lateral resistance. The sail plan accommodates this with its centre of effort well aft, which is most unusual. You’ll note that the boom extends about one seventh of the length of the boat abaft the transom, not unlike some gaffers, but more often than not, their low aspect mainsails are balanced by jibs and flying jibs set on bowsprits.


Paradox’s large lifting rudder does contribute to forces involved for making upwind, but what is strange, is that she will sail upwind with her rudder raised to 90 degrees from the vertical. As such, less than half of its surface area remains submerged. In this fashion she can sail in 2 feet of water with no problems. The rudder can be raised completely out of the water, which could be helpful if the boat were laying ahull in a gale – God forbid! She would find her natural position, but I would want the tiller port in the transom to be sealed with a waterproof gasket. The built-in baffle may not be adequate for keeping water out. In moderate conditions it would be fine.


That is not all about the rudder. What a lot of people fail to realise is that it should be in the raised position when the boat is being propelled by her yuloh, except, perhaps when the wind is from astern. The reason why it should be raised is to allow the stern to be shunted from one side to the other for changing course. If the rudder is down, there’s a tendency for the bow to be blown away from the wind. If left to her own with no sail up, she will drift downwind, settling on a course with her quarter angled into the wind. No matter how hard you try to compensate by pulling with the yuloh on the windward side it will have little effect. For me, this was a hard learned lesson.


There is yet another perplexing thing about the rudder. It is held in place by a single bolt to the starboard side of the stock. You would think having it between two cheeks would be better for structural support. The fact is that I’ve never heard of a Paradox that has lost a rudder.  Washers help spread the load and reduce friction when it is being raised or lowered.


Why Matt set the rudder to the starboard side of the stock is a mystery, because it does not help when tacking from starboard to port. Drag from it combines with drag from the offset mast and sail to port, causing the boat to slow during the tack. This can bring her into irons, from which point she will start moving astern. Reversing the rudder sometimes works, enabling her to sail off on one tack or the other. Jigging the rudder from side to side can do the trick. The easiest solution if the boat fails to tack is to paddle her around or jig her round with the yuloh. If conditions are really unfavourable because of choppy water, or if the tide is pushing the boat into the wind and she has little speed, it is better to wear ship. Ground lost is negligible.


Another unusual feature is a small step at the bottom of the stock on the port side. This is excellent for boarding the boat when she is being launched from a beach, but almost useless for boarding from the water. I found I could not get my foot onto the step and at the same time haul myself aboard over the stern. A trailing rope with a loop is the best aid for regaining entry from the water.


I could go on and on about Paradox, because she’s a fascinating paradox.

Thanks for that Bill. Very interesting indeed. It says a great deal for Paradox that a sailor as experienced as you are, owner and skipper of many good sailing boats, has such positive things to say about the design and even bought a second one when the opportunity arose.
Brian

You are right. 'Faith' my original Paradox was the best boat I ever owned. She had her idiosyncrasies, but they were minor by comparison with her virtues.

'Minnow' is not as pretty or alluring, but she has the same strengths and advantages of all Paradoxes.

The more I ponder whether I am doing right by selling her, the more I doubt I should.

Nevertheless, as things stand, she is still for sale.