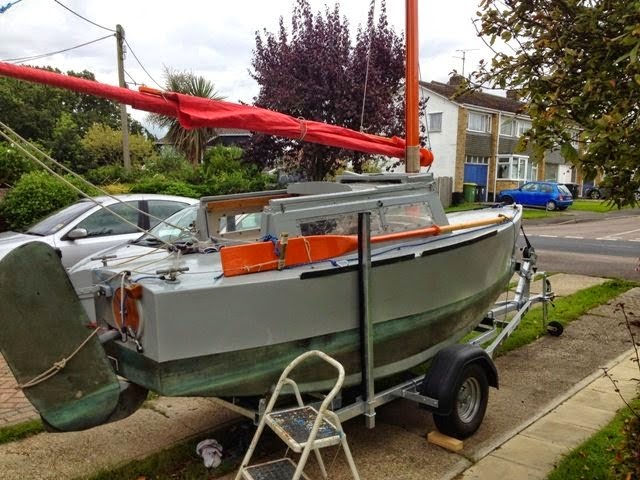 
What is paradoxical about a Paradox? The Paradox in question is Matt Layden’s micro-sailboat. Well, firstly, the definition of a paradox is ‘a seemingly absurd or self-contradictory statement or proposition that in fact may be true.


The seemingly impossible is achieved by Matt’s Paradox, because she is a flat-bottom vessel without a keel, or a centreboard or a leeboard, and yet she makes to windward, and I would claim that she does as well as many comparable boats. Out and out racing machines she will never match, but she is a cruising vessel after all - one designed as a minimal sailboat for a solo sailer who enjoys beach cruising.


What is the secret of Paradox?


The first factor would appear to be her chine runners. These are triangular sectioned flanges that follow single chines either side of the boat for about two-thirds of their length. To the best of my knowledge, no one has come up with a proven scientific theory why they should make a difference, but it’s obvious they do. From observation, I believe chine runners destroy the conventional sine wave through which the boat moves and replaces it with smaller ones; thus, resistance to forward motion is reduced.


When Paradox heels, her leeward side becomes an effective foil keel. The internal ballast to windward performs the function of a hiking crew. When she’s trimmed correctly, with her stem submerged to the planned depth of a couple of inches, her transom presents no drag, and she is in optimum mode for making to windward. The angle of heel as measured by an inclinometer is 14.5 degrees. With a wind speed of 10 knots (Force 3) and a displacement of 640 kilos (1,410 lbs) her windward chine runner will skim the surface of the water. She is at her optimum.


The second factor, unlike yachts with Bermudan rigs and tall masts for increasing luff length, a Paradox has a paradoxical rig with a short luff. Commonsense would say that will not work, but it does. Why?


Some Polynesian sails are not far removed in the shape and form from lugsails, particularly those that are peaked so that the head is not parallel with the foot. Matt’s latest designed sail for Paradox has such a shape. Incidentally, ‘Minnow’s’ sail follows this pattern. What is important to grasp is that these sails do not function in the same way as Bermudan ones. Don’t ask me to go into detailed aerodynamics, because I shall be out of my depth, but from experience of sailing junk rigged boats and one of my boats with a lateen rig, I know that they function better on the wind when they are not sheeted in tightly. Rule of thumb, dictates the clew should be over the leeward quarter when on the wind. Surprisingly, in practice, I have found that it is not necessary to browse down tightly on the luff for a good performance to windward. This is certainly the case with junk sails.


The third factor, is that Matt has done all he can to reduce drag, both above the water and below. The short un-stayed mast and minimal running rigging, plus the streamlined superstructure of the cabin trunk is effective by reducing drag. Below the waterline, there is very little to prevent forward motion. The absence of a keel, centreboard, or leeboards is advantageous by reducing surface area.


Another perplexing factor is that when running, a Paradox sail presents a centre of effort that is far removed from the centre line of the boat; thus you would expect the boat to have weather helm, but in fact she has virtually neutral helm. She will sometime run without attention to the helm for minutes at a time, and if there is a smooth sea and steady wind she will continue indefinitely – even if the crew changes position. This defies the rule, and yet it is true.
Matt, the genius that he is, has done it again!


A Paradox is truly paradoxical.


Now is your chance to acquire a UK Paradox. Check the links below and if you are serious about wanting a Paradox contact me by email:
barnacleid at yahoo dot co dot uk or by phone at 07588288060.

Hi Bill, I have always thought that part of Paradox's ability to windward comes from her large rudder blade. Having never sailed one I cannot know if this is in any true. Would love to hear your experienced view.
Good luck with the sale, I only wish I was in a position to buy her myself, as she's one of the only boats I have not sailed but wanted to. Brian.

Yes, Brian, you are right. See part 2 of Paradoxical Paradox.

It's a shame you have not had an opportunity for sailing a Paradox. I'm sure you would have enjoyed doing so. I recollect your help when I was sailing 'Faith' along the South Coast and you came aboard.

I'm not fussed about the sale. If she goes, she goes; if she doesn't, I still have her.

Who knows? My current lack of desire for being on the water may change. Only God can answer that one. If that should happen, yet again I might regret selling a Paradox.