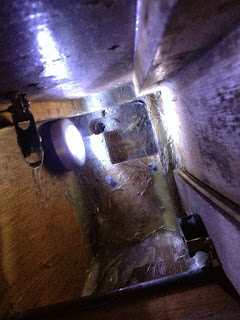 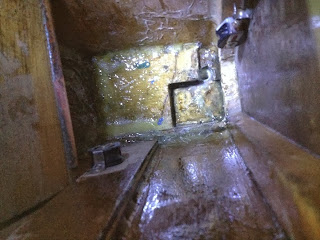 I conducted two operations on ‘Minnow’: The removal of her appendix and the reshaping of her bowels. My scalpel was a one inch chisel and I substituted a needle and gut with epoxy putty. I sealed the wounds with epoxy.


The appendix was a small lump of epoxied woven roving in the recess of the mast step. Unless I removed this foreign body I would not be able to fully insert the mast into the step. I found that I could chomp away the unwanted mass with a chisel. I had to seal the drainpipe with epoxy and epoxy putty. The operation was a complete success. 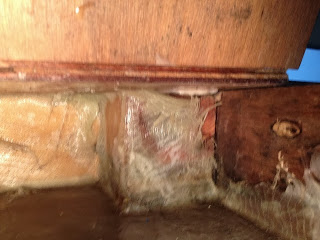 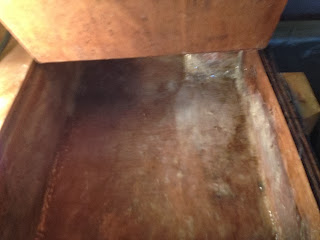 Bowels after
My next operation took place in the bowels of the boat where there was a ghastly mess of misshapen resin-saturated woven roving. This tangled, unsatisfactory sheathing over the block through which the drainpipe runs was contorted and had vicious spikes. It had been placed there to prevent water seeping into the forward port hand locker via crevasses and through pores in the wood. Water was entering the bilge via the hole for the drainpipe between the outside surface of the pipe and the hole through which it passes.


By patiently working with the chisel I was able to remove most of the offending mess and replace it with epoxy and epoxy putty.


Having completed both operations, I have two more to do for curing the leak problem: My next operation will be sealing joins between panels comprising the vent box, followed by another operation to seal the gap between the drainpipe and the sides of the hole through which it passes. I shall not be able to do the latter operation until I can raise the boat high enough to get under her.
Posted by William Serjeant at 11:24 pm

Wow Bill, these last improvements you are making are unreal. I'm impressed again. How old is Minnow? How did it get into such bad shape in the first place? Again, makes me realize how lucky I am that Ironsides was constructed by such a great craftsman and that it was so well taken care of. In fact, it's never seen a drop of water inside.

You are indeed showing a wonderful Zen attitude, I have a lot to learn from you, and not just about sailing!

Great job on the boat! Keep it up, you're almost there.

You certainly are fortunate to own 'Ironsides'.