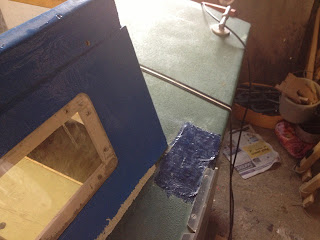 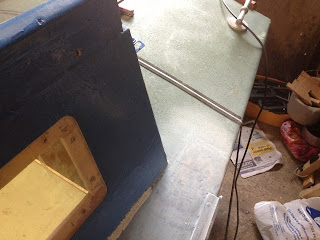 As I stated yesterday, ‘Minnow’ will never win a beauty contest, but she can be made presentable. Blemishes can be removed, if not in whole, they can in part. The point was proved this afternoon when I almost eradicated an untidy patch of fibreglassing that had been applied to the port side deck. There’s no doubt in my mind that the patch was necessary, but for whatever reason, it had not been tidied. In fact it stood out like a sore thumb dressed with a blue sticky plaster!


I performed cosmetic surgery to remove some of ‘Minnow’s’ scar tissues by the use of a file and sandpaper, and I persisted until all major crinkles in the locality of the operation were eliminated. Likewise I smoothed an incredibly rutted and rippled fillet running along the joint between the cabin trunk and the port side deck. 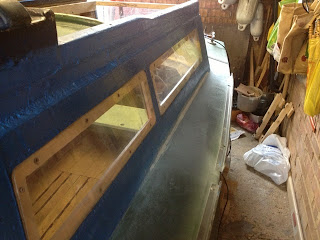 My most testing remedial surgery will be making the side panels of the cabin trunk look smoother than the parched, scorched skin of an Australian wrinkly. Making the surfaces as smooth as a baby’s bottom will not be possible, but I shall hope to smooth away some of the craters and mountains.
Posted by William Serjeant at 8:18 pm