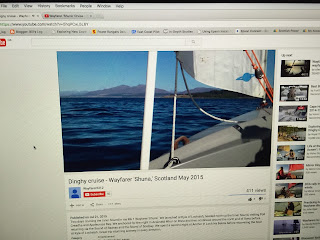 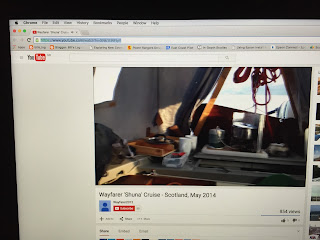 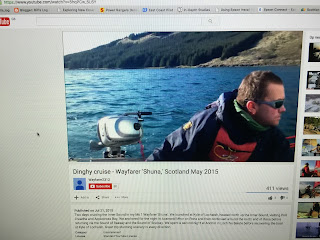 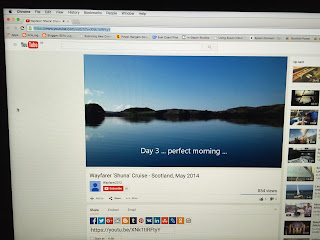 if you are a member of the dinghy cruising fraternity you will have heard of Frank Dye, who, with Russell Brockbank in 1963, sailed a Wayferer dinghy from Kinlochbervie, Scotland to the Icelandic Island of Heimaey. That’s a trip of over 600 miles across open water. The following year, he and Bill Brockbank - not related to Russell - sailed the same Wayfarer from Scotland to Norway via the Faroe Islands. Gales were encountered on both passages, the worst being a force 9 during the Norwegian passage. The Wayfarer capsized, and her mast was broken, but after temporary repairs Frank and Bill made it to land. This was a remarkable feat of survival and endurance.*

I am convinced that there are few dinghy cruising sailors who would willingly undertake open sea passages of this nature. Without a doubt, the majority prefer camp-cruising on rivers, lakes, lochs, and estuaries, but some like coastal cruising, which can be a bit more adventurous. On occasions, any camp cruising can become challenging enough when the unexpected happens, perhaps a turn of the weather bringing fog, or a change of wind direction, or stronger winds than forecast, or even calms.

Frank Dye’s exploits helped popularise the Wayfarer, particularly for cruising. She has become the iconic cruising dinghy. She’s very popular with members of the Dinghy Cruising Association. Only today, via an email, my attention was drawn to three YouTube videos featuring a Wayfarer in Scottish waters. (First to third link inclusive.)

Bill Brockbank talks about his trip to Norway with Frank Dye

Around Britain in a Wayfarer - Ludo Bennett-Jones
http://bills-log.blogspot.co.uk/2014/01/around-britain-in-wayfarer-ludo-bennett.html
Posted by William Serjeant at 9:25 pm

I read Frank Dye's book last year and was amazed at such travels in a Wayfarer. Then this year I found a book, " The sea takes no prisoners" by Peter R. Clutterbuck, about his travels in a Wayfarer in the 1960's. To the Med and Norway, again, incredible voyages for such a small craft.

I take my hat off to these open dinghy ocean sailors - they are risk takers and very brave, and they expand the horizons of all our possibilities; but if I wanted to combine the shoal draft ability of a dinghy with ocean going ability I would use a boat like the late Charles Stocks 'Shoal Waters' or design something slightly bigger - a beamier shoal draft / centerboard version of 'Sopranino' or 'Trekka' with self righting ability and built in buoyancy - but I guess for some that would be taking the risk (and fun) out of the equation.

Thanks very much for informing us of Clutterbuck's book. I'm sure it will make a good read.