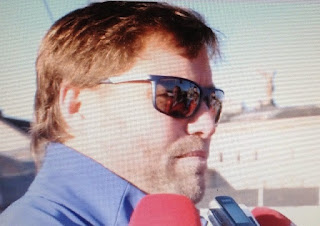 The Transat Jacques Vabre is a 5,4000 mile ocean yacht race from Le Havre in Northern France to Atajai in Southern Brazil. There are four classes, each having their own race: Class 40, IMOCA 60, Multi 50 and Ultime.  In the IMOCA 60 Class, half of the fleet of the original 20 starters have been forced to abandon the race, including Alex Thomson and his co-skipper, Guillermo Altadill, aboard Hugo Boss. She was capsized by a rogue wave that dismasted her and caused structural damage to the extent that she was in danger of sinking. Alex and Guillermo were rescued by helicopter, and today I learned via Twitter that Hugo Boss has been taken to a Spanish port.

Alex Thomson airlifted to safety as his new boat is capsized by a rogue wave
http://www.yachtingworld.com/blogs/elaine-bunting/alex-thomson-airlifted-to-safety-as-his-new-hugo-boss-is-capsized-by-a-rogue-wave-68782

Extreme Sailing: why I’m going around the world again
http://www.telegraph.co.uk/men/active/11310563/Extreme-sailing-why-Im-going-round-the-world-again.html