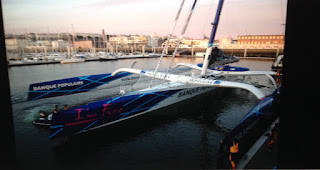 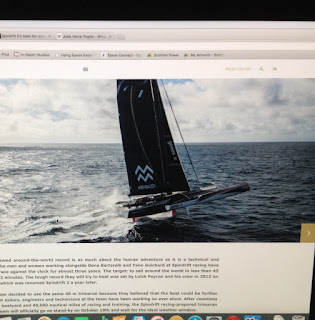 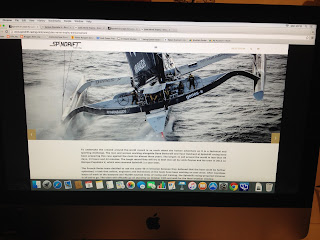 In 1958 I was a trainee pedagogue at Goldsmiths College, London University, learning how to teach children between the age of 11 and 16. It was a time of expansion and population growth. There were two opposing philosophies being taught: competition and co-operation. Those with left wing leanings preferred the comprehensive school system embracing co-operation in the hope of reducing ‘class’ differences, whereas those on the right championed private or public schools with their competitive ethos favouring the ‘haves’. These two systems were highly political, and to an extent they exist today with the growth of Academies and the support of the present Government.

What has this to do with the Jules Verne Trophy which is awarded to the owner or owners of a yacht that has sailed faster around the world than any other? Banque Populaire V skippered by Loick Peyron in 2012, took 35 days, 13 hours, 42 minutes and 15 seconds to complete the official route and is the current holder. Waiting at this very moment for favourable weather slots to start their attempts at breaking the record are two teams: Spindrift 2 with Dona Bertarelli and Yan Gulchard, and Banque Popular V with Loïck Peyron hoping to beat his earlier record.

These teams are highly competitive, pulling out all the stops to win. Competition is the key to their preparations, activities and expenditures. Ambition and desire for success are undoubtedly strong motivations for their dedication. Monetary gain is likely to be of secondary importance, but sponsorship can be a fillip along the way. Fame and pride could be incentives, but unlikely, since the main parties are mature and versed with the nature of the sea which has no respect for man, levelling all who truly experience its vastness.

Both teams will be competing with one another, but at the same time aboard their respective vessels they will be co-operating, each crew member with their companions by using their strengths and skills for working together with a common aim. There is no guarantee that either team will succeed.

Note and Food for Thought

Ecclesiastes 12:8 “Vanity of Vanities,” says the Preacher, “All is vanity.”

The Strange Story of the Jules Verne Trophy
http://www.yachtingworld.com/blogs/elaine-bunting/the-strange-story-of-the-jules-verne-trophy-4244

Video - The Story of the Jules Verne Trophy
http://www.sailingscuttlebutt.com/2015/11/05/video-the-story-of-the-jules-verne-trophy/

The Horses are on the Track
http://www.sailingscuttlebutt.com/2015/10/21/the-horses-are-on-the-track/

The Story of the Jules Verne Trophy
http://www.xssailing.com/category/jules-verne-trophy/

Incredible capsize of the MOD 70 Spindrift in Dublin during the Route des Princes
https://www.youtube.com/watch?v=CI2iIY61Lc8