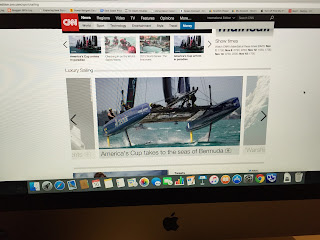 As far as I am concerned, this is madness, but a huge amount of fun. Racing brings out the good and the bad, but if the America’s Cup Series is won by following the rules, there can be no argument. I’m biased towards Ben Ainslie and his team.

I don’t believe in luck, but when a coin is spun for heads or tails, there’s a theoretical fifty percent chance that it will end up the side chosen. If this occurs more times than not for the caller, he is said to be lucky. In truth, luck does not have a bearing. Uncontrolled variables come into the equation, such as the height of the spin, the force applied to the spin, and what side of the coin is uppermost at the start. If flipped or spun by a machine the chances of being 50/50 become more even by eliminating human inconsistency.

Skill is one thing and chance is another. Chance isn’t the same a so-called luck.

To win the Cup, Ben and his team will need to be skilful and perhaps make the best of their chances!

Gamblers take note: the odds in a coin flip aren’t quite 50/50
http://www.smithsonianmag.com/science-nature/gamblers-take-note-the-odds-in-a-coin-flip-arent-quite-5050-145465423/?no-ist

The uneven odds of flipping or spinning a coin