Writing at 08.30.
This morning contrasts with yesterday's, on account of lacking sun, and there is occasional drizzle - not at all inviting. There is less wind, but the inshore forecast predicts a Force 4 to 5 from the south, increasing 6 to 7, veering SW later.
With that prospect in mind I shall not be sailing; in fact, the next spell of better weather is not due until Tuesday of next week! That's a long time for reading and resting, because there is little else I can do, except maybe go for a free bus ride or take a walk. Optimistically, I can hope the forecasters have got it wrong . . . . . but somehow, I think not.
The forecast for Sunday, when the Jester Baltimore Challenge is due to start from Plymouth, is for SW 6. If that turns out to be case, I wonder if the start will be postponed, although I doubt it.
Writing at 16.20.
Later this morning I caught the ferry to the Mayflower Steps and walked to the Esso Fuel Station at King Street. There I bought 5 litres of unleaded petrol for the outboard. I also called into the Co-op for food. Across the road was the bus stop for the number 2 that goes to Mount Batten, right by the Yacht Haven. By catching the bus I did not have far to walk; in fact, I had further to walk along the pontoons to where 'Sandpiper' is moored.
I badly needed a haircut; therefore early in the afternoon I availed myself of the bus again and continued until I saw a gent's hairdressers. Suitably shorn, I stopped at a nearby Co-op (not the same one as in the morning) and found long-life milk and a steak pasty for my evening meal.
Today I met two yachtsmen who were interested in my cruise. One owns a Hurley 20 that he is doing up, and the other has a First 28, a very able cruising yacht. I always enjoy chatting with other sailors, and today our conversations were excellent - both sailors were not keen on large yachts.
The photos are of Tony's First 28, having the name, 'Formidable'. 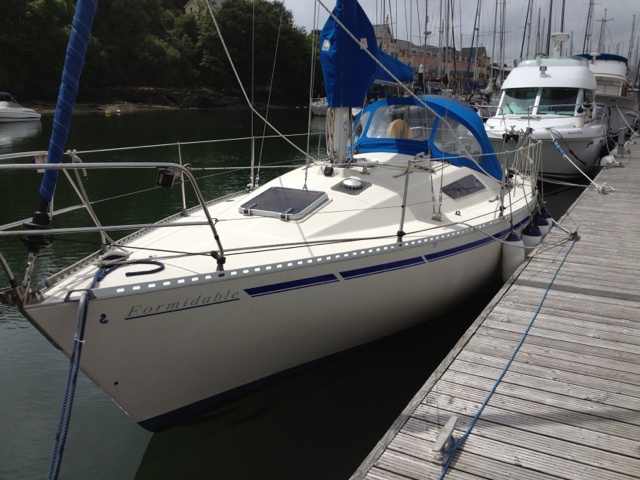 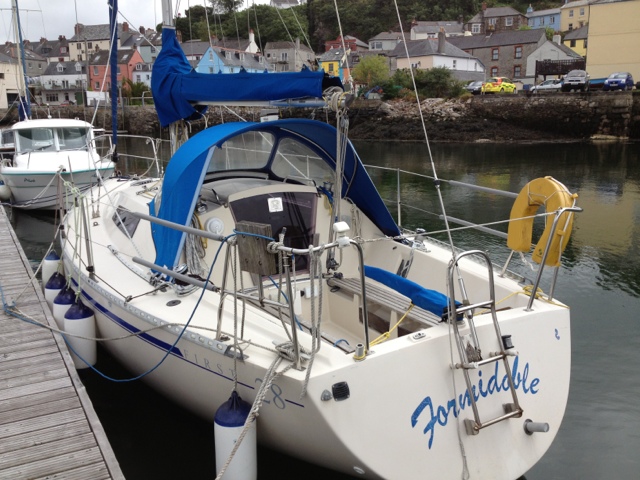 Posted by William Serjeant at 4:45 pm

Can we have pictures of the Hurley tomorrow? :o)

Separately, the forecast looks windy for the west country this weekend, take care...

Thanks Steve,
I've posted photos of the Hurley 22. The chap renovating her is doing a sound job.
You are right about the weather - not a promising prospect.
Cheers,
Bill.