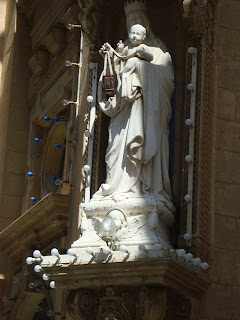 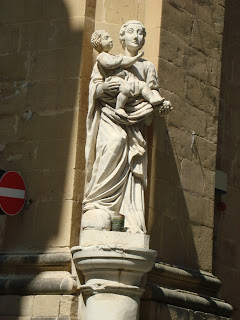 While on holiday in Malta, I visited Valetta; there I noticed a few street corner sculptures of figures most probably carved from stone.  Two of them portrayed Mary, the mother of Jesus. Other biblical characters were also represented. They were visual reminders of characters who featured in the Gospels. Sculptures of Mary depicted her carrying the infant Christ. 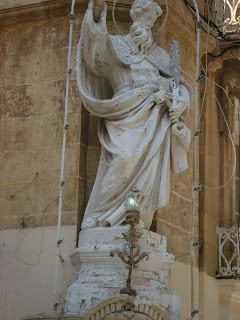 Above we have two photos of them and here we have one of Peter the Apostle who holds a key. You may remember that Jesus promised him He would give him, ‘the keys of the kingdom of heaven’. (Matthew 16:19) Exactly what this meant is open to debate, and at this point in time I do not want to enter into a personal exegesis, but the fact that he carries a key, most likely identifies the subject as Peter. He also holds what may be a sword with blood on the blade. Peter used a sword to cut off the right ear of Malchus,* the High Priest’s servant, when Jesus was being arrested in the Garden of Gethsemane. The sword could be symbolic, standing for authority, justice, judgment or the word of God.  By use of the sword, Jesus was numbered with the transgressors.**


Posted by William Serjeant at 5:54 pm