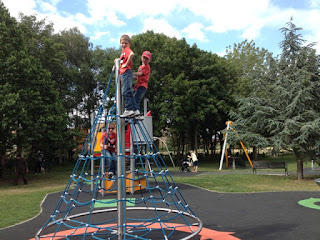 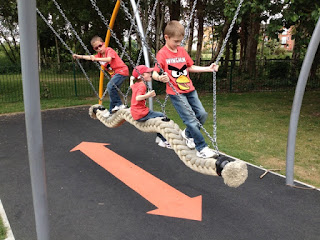 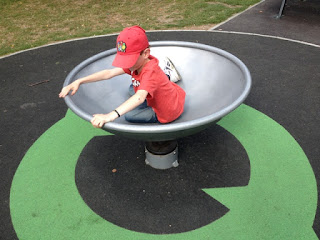 As far as I know, there is no link between Father’s Day and the Summer Solstice, but this year they both occurred today, this Sunday, 21st June.

For me it was Father’s Day, rather than the day of the year with the longest daylight hours in the northern hemisphere. I received cards from my three daughters and I had the opportunity of spending part of the day with my youngest grandchildren. Temporarily, I was father to them, as their own father was unable to be with them.

They are now at an age where they are tops in a play park. Soon, on account of their increasing age, they will lose interest in climbing frames, swings and roundabouts. Therefore it was special for me to able to enjoy their pleasure as they freely played in an almost brand new park with the latest equipment. I was reminded of my own children when they were the about the same age and they loved going to the park.

Posted by William Serjeant at 9:12 pm

Sounds like you had a wonderful day sharing your grand-children's freedom and joy. It's sad that such simple pleasures are lost to so many of us as we get older but I, for one, still enjoy a go on the swings and hope you do too.

PS A welcome break from the patio!