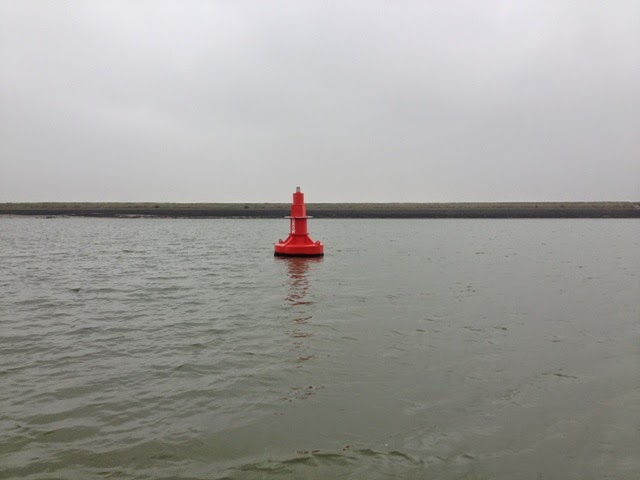 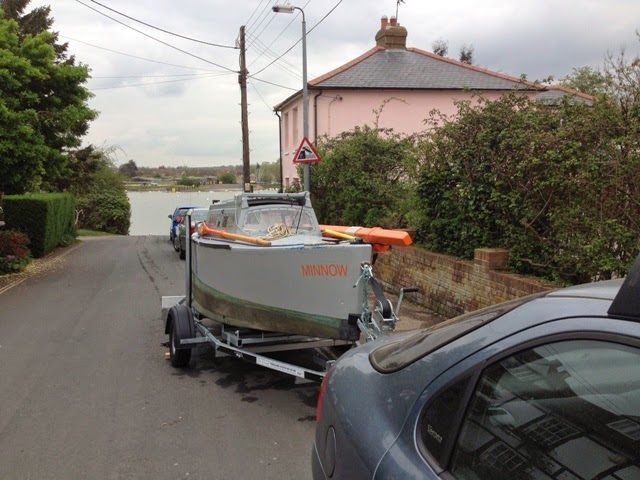 
The night at anchor on the River Roach was calm, but the drone of machinery dumping spoil from Cross Rail was not conducive to sleep. Ships bring the stuff to a purpose-built quay with huge conveyor belts further up the River Crouch – not a pretty sight.


However, the morning brought a pair of geese honking as they flew across the river. It was time to get up and have breakfast. Dawn revealed a thin layer of grey cloud.


I missed the Shipping Forecast by five minutes. Never mind, I had no intention of going to sea. Breakfast, a wash and shave, plus use of the bucket had me feeling more awake.


My plan was to sail as far as Fambridge against the wind, but with the help of the flood tide. I tried breaking out the anchor, but it was well and truly stuck, most probably lodged under an old mooring. There was nothing I could do except cut it loose. With the bower gone, I could not continue the trial sail unless I bought another one. The small anchor was not enough for holding the boat in a blow. I only intended using it as a short stay anchor and for setting on a beach when drying out.


The wind from the northwest was variable between Force 1 and 2, which made for interesting sailing between the Burnham moorings. I noticed that ‘Minnow’ sailed almost identically to my old Paradox, ‘Faith’, having the same reluctance to carry her way when changing from starboard tack to port tack. I had to nudge her once of twice with the yuloh for the sail to fill. On the other hand, ‘Minnow’ was well balanced, requiring little attention as she cannily held her course, which made my Autohelm almost obsolete, except when motoring.


Well, instead of stopping at Fambridge, I continued to Hullbridge with the intention of taking ‘Minnow’ out of the water. High water was about 16.30, by which time I had her on dry land at the Ferry Road slipway. I had arrived at the slipway twenty minutes earlier, took a taxi home, hitched the trailer to the car, and drove to the slipway. ‘Minnow’ was on the driveway by 17.10.


In conclusion I can confirm the boat sails and performs as she should, but what I have also found is that I do not have the strength and stamina I had only a year ago. Because of this, I know I shall not be sailing the long haul around the Kent coast and onwards to the West Country. I would be foolish to undertake the trip.


I shall also have to consider whether I should take ‘Minnow’ by road to Plymouth, because I have to admit that I may not be capable of keeping myself safe. In view of this I may have to make a very hard decision and recognize that I may have to give up solo sailing.
Posted by William Serjeant at 9:49 pm

Bill, when I sailed with you from Lymington to Keyhaven I learnt so much about true seamanship. Your demonstration of the highest level of care, attention to detail was terrific for me to observe. Whilst others wonder about which boat is the most seaworthy, you sail one different design after another past my home here on the cliffs overlooking Christchurch Bay on your way to the Westcountry.
Please allow for early season unfitness, getting used to a heavier boat again before making any big decisions. We all feel less strong early on in the season. What ever you decide - what a wonderful sailing career you have had and will continue to have in whatever form. Best wishes Brian.

Hello Bill, I have no where near the experience you have, but reading the odd piece on lug rigs in general and the ones used by the old fishermen and longshoremen from all around our coasts in times past in particular, one shouldn't be put out by having to help the old girl round onto another tack in light airs.
Going on what you've already written about your trial sail, I would say that it has been a success.
As to your other remarks about your fitness to continue solo sailing, I really can have no remark to make. I'm not you, and I'm not your physician. I admire your bravery and honesty in even blogging about the subject, which, in a way tells the more astute person that mentally, and spiritually, you're more than equal to the task. It should also be pointed out that Minnow is perhaps the ideal boat for you at this time in your sailing career?
I could, at the risk of boring you to death, tell you that my feelings are that when your to die then no matter what, you will, no matter what activity you are persuing at that particular time. Statistically,(!), you took by far the greater risk towing 'Minnow' to and from the launch/recovery sites?
I'd never say throw caution to the winds and carry on regardless, and clearly, you never have, but certainly, you're as well prepared as anyone, and theres absolutely no reason for you not to carry on if thats what you decide.
On a final note, commiserations indeed on the loss of your anchor. I'm quite sure that if by some seismic event the Thames estuary ran dry, lost and abandoned anchors will feature largley in the beach combers bounty.

Hi Bill
Bad nights sleep followed by the loss of your anchor would annoy anyone.
Whatever you decide to do I would like to say thank you for your fantastic blog which dare I say it I read religiously every day.
Im fifty and I find small boat sailing very hard. Up until relatively recent times most inshore fishermen never ventured more than 10 miles from their patch. What you have done and continue to do is remarkable.
Your blog continues to inspire me and i use it to help me decide what boat and equipment i will need.
Thanks again
Michael

I remember that sail, and also your help with getting the engine sorted.

I shall take note of your point about early season unfitness, but at the moment I feel long haul solo is out, due to lack of stamina and loss of strength.

Paradox is a super boat, but she has that one fault, which is more evident in light airs when the tide is pushing her to windward. It comes about because the mast is offset to port and the sail is also on the port side of the mast. Releasing the sheet can help, by allowing it to feather. Sitting on the starboard side also helps by heeling the boat.

You are right about the trial sail being a success. However, I would have liked more wind for testing the boat when reefed.

The anchor can be replaced, but without it, I could not continue. A minimum of two anchors is good practice; three is better.

Sailing by oneself in a small boat for any length of time is difficult. Robin Knox-Johnston at 75 is to shortly solo race across the Atlantic in an Open 60. He will not find it easy!

Interesting comments about tacking in a combination of light wind and tide. Our lug rigged Scows are the same. It's really easy to become trapped mid tack. No problem in more wind, but a real issue in light winds with tide. I have been trapped even racing the Nationals. Only way out with a Scow is to push the boom forward and push the helm over. The better balanced the boat is the more likely it is to happen.
Good to read you are taking your time over any decisions. Is two up possible in a Paradox?
Brian

Two up in a Paradox is a real squeeze - not practical in my opinion for more than a very short cruise.