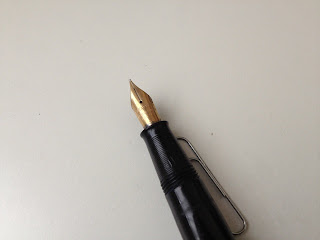 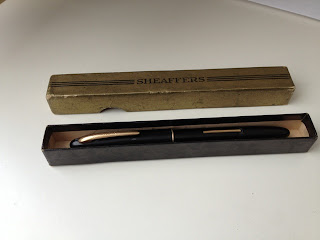 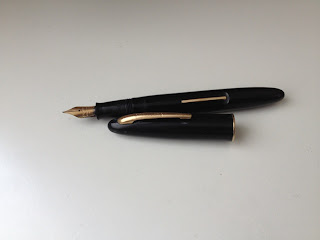 ‘The pen is mightier than the sword.’*
When I was at school, I sat at an oak desk that had a ceramic inkwell which required topping up. I would dip the nib of my pen into the ink before writing. If I dipped too deeply, ink would run off the nib and cause a blot. If I didn’t immerse the nib sufficiently, there would not be enough ink in the reservoir for writing more than a word or so, but when loaded correctly, I could perhaps write half a sentence.
This was about the same era ballpoint pens became available to the masses, but they were frowned upon by teachers and banned from the grammar school I attended. They were not entirely reliable, and often ink would rub off the paper onto ones hand. Getting it off was a problem.
The very first ballpoint pen was invented as long ago as 1888 when John Loud, an American leather tanner came up with the idea for marking his leather hides, but it wasn’t until the mid 1940s that the concept was developed and the manufacture of ballpoint pens became commercially viable. There were hiccups on the way, and the Biro brothers, Ladislas and George, suffered setbacks with the manufacture and sale of their ‘biros’, but eventually, in 1944, their perseverance paid off when people started buying their revolutionary pens.
Sheaffers, the Fort Madison Iowa fountain pen manufacturer, realized the potential, and produced their first ballpoint pen, the RA-1 Stratowriter, in 1946. That was the very year their Variation 111 Touchdown Craftsman fountain pen sold like hot cakes. It was a low price, lever operated ink-filled pen fitted with a plain, gold style ‘Triumph’ pointed nib. My wife’s brother lived in India at the time, and he was given one of these pens as a present. Sadly the young man tragically died shortly after receiving his pen which now belongs to my wife.
The pen has great sentimental value for her; therefore she would not part with it at any price, despite the fact that a collector may perhaps pay in excess of £100 for it, not just because he desire it, but because the pen comes with its original box which is in good condition.
*The Pen is Mightier than the Sword
http://en.wikipedia.org/wiki/The_pen_is_mightier_than_the_sword
Other Links
Sheaffer Touchdown and Snorkel
http://www.vintagepens.com/Sheaffer_Touchdown_Snorkel.shtml
Sheaffer Touchdown and Snorkel
http://www.pendemonium.com/pens_sheaffer.htm#touchdown
Sheaffer’s Touchdown
http://www.richardspens.com/?page=coll/col_05.htm
Sheaffer Pens History
http://captainchang.com/pens/sheaffer.html
Ballpoint Pen
http://en.wikipedia.org/wiki/Ballpoint_pen
Ballpoint Pen
http://www.ideafinder.com/history/inventions/ballpen.htm
Sheaffer Pens
http://www.rickconner.net/penspotters/sheaffer.html
Posted by William Serjeant at 12:16 pm

Hello, my name is Matthew Cherry. i run and maintain a blog named Rock Your Freedom. Would you consider following me at rockyourfreedom.blogspot.com? Thank You!

Thanks for sharing the blog it is very important and interesting topic in which peoples are receiving great information and very helpful.