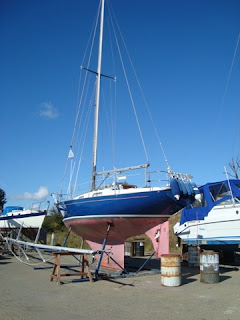 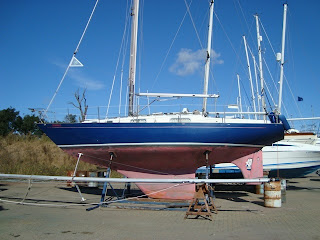 When I did my RYA Yachtmaster’s practical assessment I was examined aboard a Contessa 32. She was based on the River Orwell at Levington Marina, and she was owned by the examiner. Two of us were being assessed. We each in turn had to assume the role of skipper, while the other did the navigation.
I was first as navigator, and I was given the task of navigating the yacht past Harwich and Dovercourt to a particular latitude and longitude roughly SE of the Naze Daymark. It was a pretty windy day and the visibility at the outset was poor. I noticed that the lat and long position was directly over a small area where the depth of water was deeper than the surrounding water by about 3.5 metres. I laid the course on the chart, and allowing for tidal vectors, variation etc., I gave steering directions to the helmsman, who was acting as skipper.
Good fortune came my way when visibility opened sufficiently for me to take bearings of the Naze Tower Daymark.  Bearings, distance off by sextant angle and depth of water confirmed I had successfully taken the yacht to the required lat and long position. Time came for doing man overboard drill. The examiner without warning threw a fender in the water and told the helmsman there was a man overboard. I came on deck and pointed to the fender while he tried to bring the fender alongside where it could be retrieved from the water. His first attempt failed miserably, because he had not slowed the yacht sufficiently. His second attempt was better, and by the third go he did the manoeuvre perfectly.
By then it was time for lunch, and I had to assume responsibility as skipper. We exchanged roles. I hove the yacht to, and all of us kept watch while we ate packed lunches.
When it came to my turn for man overboard drill, it was easier for me, because by then I had a pretty good idea how far the yacht would travel until becoming stationary. She was a very slippery vessel and she was beautifully behaved with almost neutral weather helm.  She could stand up to a blow without the need for reefing in winds up to Force 5. She would just go faster when the wind increased.  In gusty conditions, one could simply spill wind from the mainsail. This particular Contessa 32 did not have a furling headsail.
Links
Contessa 32 Class Association
http://www.co32.org/
Contessa 32
http://en.wikipedia.org/wiki/Contessa_32
Jeremy Rogers
http://www.jeremyrogers.co.uk/
Contessa 32 Specifications
http://www.jeremyrogers.co.uk/about-contessa/contessa-32-specifications.php
Contessa 32 Overview
http://bluewaterboats.org/contessa-32/
Confessions of an Old Salt
http://bills-log.blogspot.co.uk/2010/09/confessions-of-old-salt.html
Yachting Qualifications
http://bills-log.blogspot.co.uk/2005/02/yachting-qualifications.html
Posted by William Serjeant at 8:40 pm