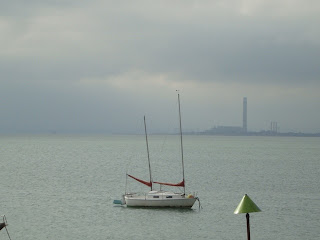 Looking towards the Entrance to the Medway and the Isle of Grain Power Station
The scene is tranquil enough, but under the water by the entrance to the Medway there is a lurking time bomb - one that could devastate the nearby port of Sheerness and cause a metre high tidal wave in the Thames estuary affecting places like Southend-on-Sea and Canvey Island.
In 1944 the SS Richard Montgomery, a US Liberty Ship, loaded with 7,146 tons of munitions dragged her anchors off the entrance to the Medway and became irretrievably stuck on a sandbank. Only approximately half of her deadly cargo was retrieved before her bow section flooded and she sank. The mission had to be abandoned. Since then she has broken in two; her masts are still visible above the surface of the water.
I have sailed by this forlorn wreck on several occasions, knowing full well that if something caused her cargo to explode, I would be destined for extinction, but my soul would live on.
1Thessalonians 4:13, 14 ‘But I do not want you to be ignorant, brethren, concerning those who have fallen asleep, lest you sorrow as others who have no hope. For if we believe that Jesus died and rose again, even so God will bring with Him those who sleep in Jesus.’
Links
The SS Richard Montgomery
http://www.yachtrhumbdo.co.uk/ss_richard_montgomery.htm
SS Richard Montgomery structural collapse 'getting closer'
http://www.bbc.co.uk/news/uk-england-kent-14809752
Hydrographic Thermal Images of the SS Richard Montgomery
http://medwaynavigation.co.uk/services.html
Old Isle of Grain Power Station
http://en.wikipedia.org/wiki/Grain_Power_Station
New Isle of Grain Power Station
http://www.power-technology.com/projects/isleofgrain/
Posted by William Serjeant at 3:42 pm