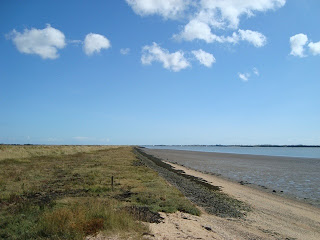 There is something beyond the horizon.
This was the belief of maritime explorers who sailed into the unknown - Christopher Columbus and Ferdinand Magellan were notable examples of those who reasoned the world was spherical. Prior to their voyages of exploration in the 15th century many believed the known world was flat, and that it came to an end, where oceans cascaded off the edge. They were fearful that ships venturing nearby would come to a sticky end.
When you are at sea beyond sight of land, you observe the curvature of the horizon. As you approach land you see more and more of it, until eventually you observe surf breaking on the beach or at the cliff face. There is no horizon and you are in peril. The land and all that it offers brings death and destruction. You must turn about and seek safety beyond the sea’s horizon into its circle of protection.
When I walk the paths beside the River Crouch I am awed with a sense of infinity, the incomprehensible enigma of unending space and time, horizon beyond horizon, apparently unreachable. There I meet with the One who created space and time.
I know that to know Him is to know the Eternal.
Those who seek Him earnestly can find life beyond the horizon; His love and protection within.
John 14:6 ‘Jesus said to him, “I am the way, the truth, and the life.”’
Links
The Flat Earth Society
http://www.alaska.net/~clund/e_djublonskopf/Flatearthsociety.htm
Christopher Columbus
http://en.wikipedia.org/wiki/Christopher_Columbus#Geographical_considerations
Ferdinand Magellan
http://www.enchantedlearning.com/explorers/page/m/magellan.shtml
Posted by William Serjeant at 11:14 am