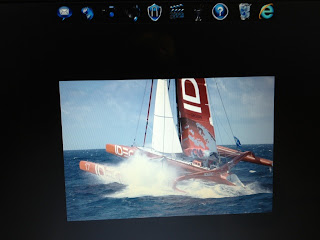 Francis Joyon has done it again! He has broken the record for sailing solo across the Atlantic in the least time. Having previously broken the record in 2008, he set off again from the Bay of Cadiz on Wednesday, 6th February, 2013, and after an astonishingly fast crossing of 8 days, 16 hours, 7 minutes and 5 seconds, his 97 foot trimaran, IDEC, crossed the line at San Salvador. For four of those days the huge trimaran sailed more than 500 nautical miles at a time. Altogether on the Columbus Route he sailed 4,379.5 miles at an average speed of 21.04 knots. Can you imagine what it must have been like?
Joyon already holds the record for sailing solo around the world faster than any other person; he did it in a time of 57 days, 13 hours, 34 minutes and 6 seconds. He also holds the record for the furthest distance sailed in 24 hours, a distance of 613.54 miles at an incredible average speed of 25.56 knots. And now he has the Columbus Route record, officially ratified by the World Speed Sailing Record Council .
It appears he wants to have a crack at the New York to the Lizard record, and he is making his way to the Big Apple where he will wait for favourable weather.
Links
Francis Joyon
http://en.wikipedia.org/wiki/Francis_Joyon
Idec 11
http://en.wikipedia.org/wiki/Trimaran_IDEC
World Speed Sailing Record Council
http://www.sailspeedrecords.com/
Posted by William Serjeant at 5:12 pm

Don't know about you but I'd love to have a go on her... not trans-Atlantic though!

I think it would be a great experience.

If she makes it to the Lizard I may have a chance to see her when down at Falmouth - that's if I get that far with 'Sandpiper', my West Wight Potter.

My plan is to set off about mid April, and I hope the weather will be favourable.