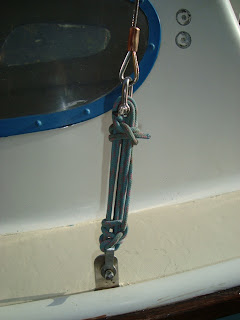 The standing rigging that came with the boat when I bought her was not satisfactory, because the stainless steel shrouds were far too short. The lower ends of the bottle screws were about a foot short of the chainplates! The top of the furling rod was held in place by a lashing instead of a stainless steel strop. I also discovered that the bottle screws were made from different metals, i.e., steel and bronze, so that the threads became seized; in fact when I tried tightening a bottle screw it snapped. I’m glad it happened then, because I wouldn’t have wanted it to fail when I was sailing ‘Sandpiper. 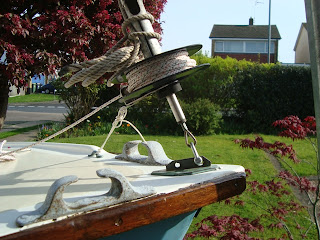 For now, I’m using lanyards instead of bottle screws, but if I find I am unable to achieve sufficient tension on the forestay I’ll replace the lanyards with bottle screws. An advantage of lanyards is that they do not twist and become snarled as the mast is being raised. There is no need for a bottle screw at the bottom of the forestay.


I have added a topping lift, because it will help when it comes to putting a reef in the mainsail, and I shall be able to rig a boom cover over the cockpit – especially useful if it rains when the boat is at anchor.
Posted by William Serjeant at 8:12 pm