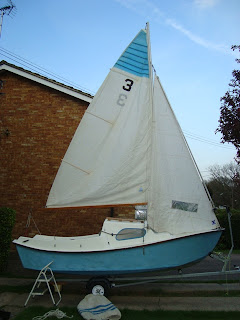 The sails, but not as they should be. Note that the foresail is not slotted into the furling rod, and the luff of the sail is too long. 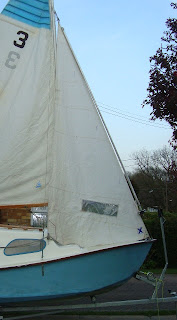 
Before I bought ‘Sandpiper’ I researched West Wight Potters with a view to buying one. I had already travelled to Hayling Island to see a ‘B’ Type, but she was far to cramped within her cabin. ‘Sandiper’ has more useable space, which is one of the reasons I parted with my money.


Another reason for buying her was her furling foresail. However, I was shocked to find that the sail did not fit the luff rod, since the luff of the sail was far too long and it was impossible to thread it into the groove! Instead of a luff rope the sail has a wire one. When I examined the boat before shaking hands on a deal, I mentioned to the owner that I had never seen a furling jib with a wire luff. I must have been half asleep, because bells should have rang, warning me that things were not quite right. 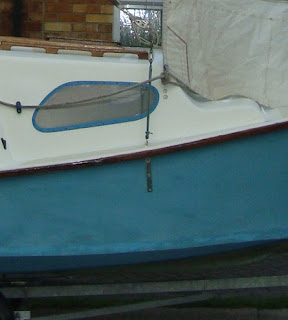 Bottle screw - short of the chainplate.

More surprises were to come. Today, when I tried placing the mast in the tabernacle, prior inserting the pivot bolt, I could not do it because the halyard cleats were in the way. The only solution was for me to stand on the foredeck while holding the mast vertically so that I could drop it into position; but even then I had to raise the mast about 4 inches from the base plate before the pivot bolt could be passed through the mast and the tabernacle! I noted there were lengths of cord tied to the bottle screws, but I believed they were there for temporarily tying the shrouds to the chainplates. The forestay didn’t reach the stem head fitting, which meant I had to lengthen it by attaching a short strop. I was astonished to discover that the shrouds also did not reach their chainplates. Even if the mast was lowered to the base plate, I doubt the standing rigging would be long enough. Furthermore, the luff of the jib would be too long!


What do I do now? I could add strops to the shrouds as I did to the forestay. I could cut the luff wire at the head to remove the cringle that prevents me from threading the luff into to furling rod, but that would not be an entirely satisfactory solution. The better, more expensive option would be to have new standing rigging and a new furling foresail. A close inspection of the plastic furling drum, revealed there was a small crack at the top of the channel through which the forestay passes. I shall need to re-examine the fault to assure myself that it will hold.


I am left with a few decisions as I reflect on how foolish I was not to have seen the rig set up before I bought the boat. However, when viewed within the context of ‘messing about in boats’, I know it is all part of the fun. She will be made right. She will be a good boat. I must continue on this positive note.
Posted by William Serjeant at 10:38 pm

Let me know when you visit Leigh-on-Sea.

Hopefully, I'll still be around before doing a spot of cruising in the Potter.

Bill, Alas the problems of buying a boat on a trailer and out of commission. I've just replaced a bent bottle screw which I missed and need to spend £50 on a new fuel tap for the outboard, but the price was right so small beer in the scheme of things.

I cut down a jib which was too long and fitted a bolt rope for the r/r on our endurance, took a few hours but saved a lot of cash.

Good luck she looks like a boat for having fun and keeping it simple.

I recommend you lengthen the stays by adding deadeyes and Dynema lashings like the catamaran sailors do. I think it could be much less expensive than wire rigging for what you are doing. A lot of multihull sailors are doing the same thing. In the past Precourt systems made Deadeyes for small boats. Then chop the Jib and sew on a rope luff designed to fit your roller furler and you are set.

Hi Bill, I recently met up with a Hurst Castle Sailing Club member to discuss the SCAMP design and possibly building in GRP. It turned out he used to build the West Wight Potters, so if there is any info you need I could re-contact him for help.
Good luck with the new boat, Brian.

Thanks guys for the useful comments. Keep them coming.