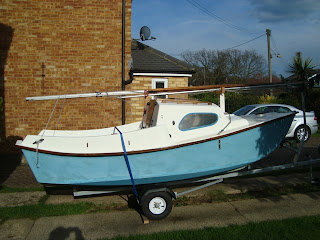 
Nothing very much has been happening on my blog for a few weeks because there’s been little to write about. Since before the end of last year I have been looking for a new project, and I was uncertain as to what form it would take. I was reluctant to commit myself to building another boat, which led me to look for a second-hand one that I could improve. After seeing many boats I narrowed my quest to a sailing boat similar to ‘Faith’, my old Paradox – a vessel that could fit into my garage and be taken by road to new cruising waters. As there were no Paradoxes for sale in the UK, the next best thing was a West Wight Potter, preferably one of the later models.


Search as I did, I could not find a suitable Potter, until today, when I chanced upon an advert for a ‘C’ version. Only a few days ago I looked at a West Wight Potter ‘B’ type, but I felt she was rather too cramped within her cabin. The ‘C’ model has longer bunks that extend under the cockpit seats, both on the port and starboard side. Another advantage of the latter is her small sliding hatch that makes getting in and out of her cabin easier than the ‘B’ type. My Potter has a Bermudan rig with a furling jib, unlike the ‘B’ version that has a Gunter rig.


‘Sandpiper’, for that is her name, didn’t come with an engine; therefore I’ll have to find one, because it will be helpful when the wind drops. Here in the South East of England large tides generate fast currents. When the wind is contrary to the moving water, conditions can get a bit bumpy, and rowing a WWP when it is like that will not be fun. I shall need an engine without a doubt. Yes, I know Charles Stock managed his ‘Shoal Waters’ without an engine, but a West Wight Potter is so very different to his converted Fairey Falcon, and more to the point, I’m not Charles! Like the boats, we are so very different.


My immediate neighbour saw ‘Sandpiper’ parked on the driveway, and he enquired if I was about to embark on ‘another adventure’, to which I replied, “Maybe.”


Incidentally, I’ve broken my lifetime rule, never to own more than one boat at a time. ‘Talitha’ will have to go to make room for my latest acquisition. If you think you may be interested in owning her, come and see – and perhaps make an offer.


Info can be found here: http://bills-log.blogspot.co.uk/2012/03/talitha-is-for-sale-at-ebaycouk.html
Posted by William Serjeant at 9:36 pm

Congratulations on your new purchase. She should be a bit dryer!

Well, I hope so Paul. I'll be able to sleep aboard her, unlike 'Talitha'.

I wish I could keep both boats - 'Talitha' for exhilarating day sailing, and 'Sandpiper' for pottering and cruising.

Unfortunately I can't get both boats in the garage for winter layups.

Incidentally, I'm pleased you are having fun with your latest boat. She looks pretty fast.

Yes Bill I am enjoying my 'downsizing' experiment, I had forgotten how much more enjoyable small sailing craft are.I am looking forward to being able to explore all the shallow places my previous 1.8 meter draft prevented. Only two weeks before we head to the UK and Europe for a couple of months - hope to catch up some time when there.

Cool, I had a 30ft. catamaran, spent a lot of time sailing sideways & backwards. so moved down to the brilliant elizabethan 23, fantastic boat, but she was too big to trailer!Then bought a 17'Skipper,fitted her out for cruising,4 of us, me'n'her and two lively kids. Brilliant little boat, go anywhere any weather, none of this day sailing estuary only stuff! I did buy a westie 15' but just couldn't squeeze us all in! but a real little go any ship! Might get another now the kids have flown nest.It's the small boats which leave harbour not the gin palaces!

Hi Bill, I've just bought a Potter 14 too. Looks pretty much identical to yours other than the entire gunter rig mast is wooden. I've not assembled the mast yet, and it looks quite complex. Do you have any tips?

This is my first sailing boat. I did my Day Skipper a few years ago but all of the boats I sailed were already set up.