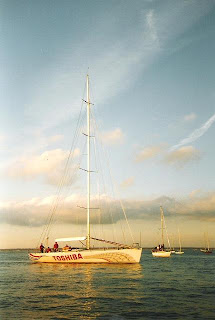 Saturday, 30th August could not be stopped. Inevitably the world kept revolving, and on that particular morning the wind kept blowing. The Shipping Forecast told of a low pressure system centred over South Wales that would move northeast towards Scandinavia. Forecasters predicted there would be winds between Force 5 and 7 from the northwest, but they would decrease while backing to the southwest. Visibility would be moderate to poor.


That was almost ideal for a fast passage to the Solent. By 0700 we were on our way. I set the self-steering gear for a course of 103 degrees compass to a point one mile south of St. Albans Head. Since it was a Saturday there was no firing at the Lulworth Gunnery Range. Active firing would have forced us south of the danger zone. The Range patrol boat would have made sure that we didn’t stray into their patch.


We passed the usual landmarks: St. Alban’s Head and Anvil Point, where on the west-going stream there’s always a popple. We arrived there at low water which helped smooth the sea; then we took the flood into the West Solent, north of the Needles at the western end of the Isle of Wight. We constantly logged over 4 knots, sometimes 6. Sailing with the wind from astern was truly exhilarating. We sailed halfway between Hurst Point and Fort Albert to avoid the treacherous Shingles Bank to the north, across which I inadvertently strayed when sailing ‘Zeta’, my Folksong, twelve years before. I swear her keel almost touched bottom when she was in troughs below curling wave crests. Good fortune was ultimately on my side. In hindsight, God’s providence saw me through. Luck or chance, played no part. 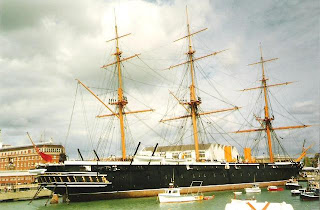 If we live after making serious mistakes, we should learn from them, so that we may continue living and pass on our knowledge to others in the hope that they will profit from our mistakes. Adlard Coles’s, ‘Heavy Weather Sailing’ is full anecdotes passed on by those who survived at sea when pressed to the limit. The book contains much knowledge and wisdom for those who would venture into turbulent waters.


By 1800 hours ‘Aziz’ was securely tied to a visitor’s buoy adjacent to the Town Quay. I felt really pleased with her performance. According to the Walker log we had sailed 52.6 miles in just over 11 hours at an average speed of 4.7 knots. In fact, we had travelled further over the ground, having been helped by the flow going up Channel. On the whole, visibility had been good, and I had found no reason for it to be poor, as expected from the morning forecast.


The mooring was uncomfortable because of frequent traffic entering and leaving Cowes Harbour: large ferries, yachts and motor yachts. By 1000 the next morning I had had enough, and sailed over to Gosport where I berthed ‘Aziz’ at the Marina. I didn’t like motoring through the narrow passage into Portsmouth Harbour because there were far too many vessels coming and going. At last I found peace and security at the Marina - one of the cheaper ones too at just £11.00 a day.

Psalm 9:1 ‘I will praise You, O LORD, with my whole heart; I will tell of Your marvellous works.’