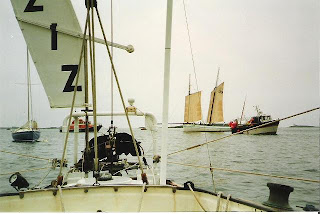 That evening turned out to be quite pleasant. I had my meal while sitting in the cockpit admiring local sailing boats doing a spot of racing. These large open boats have three masts and exceedingly long bowsprits. They have the capacity to carry enormous amounts of sail that needs attending to by up to a dozen crew members.


Before setting out from L'Aber Wrac'h on the morning of Tuesday, 19th August I sought the harbour master to pay my mooring dues, but he was nowhere to be seen. ‘Aziz’ was a mile or so to sea when I heard yelling from a chap in a fast launch. It was the harbour master seeking payment for my night’s stay. Long lengths of kelp entwined around the propeller, reducing its efficiency. Kelp also snarled the Walker trailing log.


Out at sea we were intercepted by the crew of a French yacht who didn’t know where they were. I was able to give them their position, for which they were grateful. The grey sky was rather uninspiring, but variable winds from almost dead calm to Force 3 added some interest to the general dullness. At 1603 Concord passed overhead with the usual shattering explosive sound. I saw the first of several freighters going up Channel. 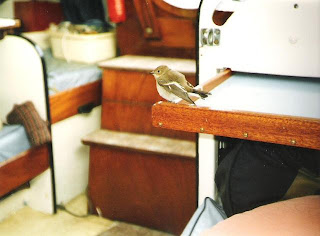 Later that evening a tiny bird resembling a Robin landed on my shoulder before flying into the cabin. Wherever it pitched the inevitable happened. Within a short time there were droppings all over the place. After resting in the forecastle for an hour or so, our visitor flew outside and perched on the radar reflector. From there it flew to the guardrail and as the yacht rolled, the tiny creature lost its footing and fell into the water. I tried grabbing the helpless thing, but I could not reach it. Very quickly I lost sight of the doomed animal. 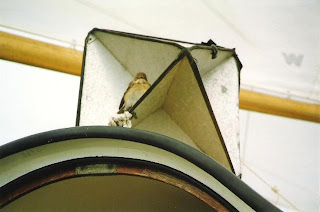 Moments before his untimely death

Next morning at 1050 we were treated to double sonic booming blasts from Concord. By 2000 we were only three miles from the Eddystone lighthouse, and less than three-and-a-half hours later, ‘Aziz’ was at anchor in Cawsands Bay.

1 Corinthians 9:24 ‘Do you no know that those who run in a race all run, but one receives the prize? Run in such a way that you may obtain it.’
Posted by William Serjeant at 8:43 pm