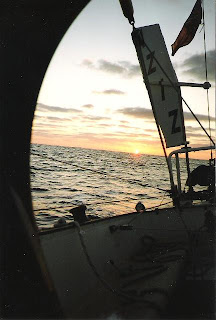 I sailed all day on Wednesday, 13th August with almost perfect conditions. At midnight the wind dropped altogether; therefore I did two hours of motoring before heaving to for sleep. The wind picked up about 0700 and I had a nice beat to seaward of the Île de Sein. At mid-afternoon I had to keep clear of several large ships, moving in all directions. Fog was rapidly advancing from astern which prompted me to head for the Anse de Bertheaume, where I could anchor in shallow water and be clear of shipping. I anchored there at 0330 on Friday, 15th August.


The objective was to sail to Brest, as I had not been there before. After a free night at anchor I awoke at 0600. Having had two-and-a-half-hours of sleep I felt pretty good. I made breakfast and attended to my ablutions, by which time it was 0830. Within a jiffy the anchor was stowed and we were on our way towards Brest. There was a light wind; therefore I stuck the engine on, but I immediately noticed it was not charging the battery. The dynamo had slipped from its housing, so I temporarily repaired it by wedging it into place with a piece of wood. We arrived at Moulin Blanc Marina in time for me to hear the evening forecast. 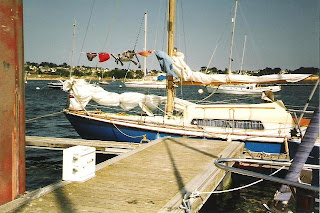 As I was having my evening meal three Czech lads wanted to have a chat and to practise their English. They were Thomas Janda, Libor Smejkal and Pavel Kratky. Their very smart, plywood catamaran was designed and built by Thomas. He had given her a very distinctive name, ‘Dirty Rank Unsuccessful Young Man’! They had the smallest of inflatable dinghies which made me hold my breath as they returned to their boat at anchor. They couldn’t afford to berth at a pontoon.