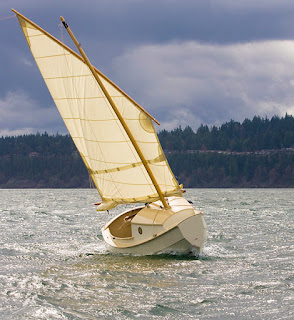 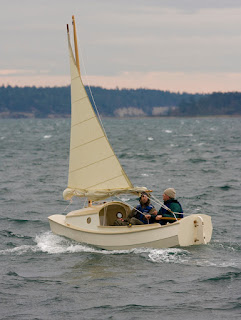 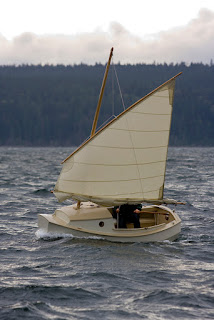 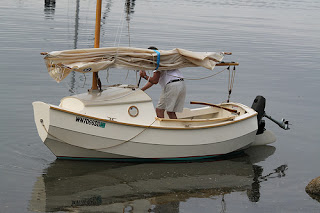 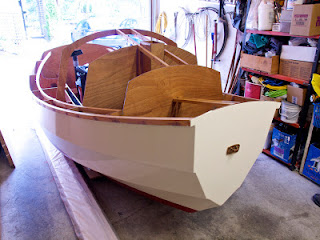 Brian’s recent comment with a link to John Welford's Long Steps* and a mention of John’s Scamp got me thinking about the latter. She’s a development of his Tread Lightly,** the plans of which John gave me in recognition of my work featuring his boats at my old Small Sailboats website. I liked Tread Lightly, but I opted to build Matt Layden’s Paradox instead, because the former was too beamy (5’ 5”) to fit in my garage and she was more complicated to build than Paradox. Furthermore, Paradox gave complete shelter from the elements and she was self-righting.

Scamp is simpler to build than Tread Lightly, but with a beam of 5’ 4” she is still too wide for building in a normal English garage - there just isn’t room for moving around to do the build.

Googling Scamp I have found a lot about her, and the more I read, the more I like her, but one thing I am not at all keen on is the fact that she can capsize and she is not self-righting! Watching the video of Howard Rice righting Scamp gave me the shivers. I also wondered if she would be as easy to right if she capsized with her starboard side down. I would like to see a video with that scenario.

Despite these minor reservations, I’m impressed. She would be an ideal boat for the sort of cruising done by the UK Dinghy Cruising Association, and she would meet their safety recommendations.

An experienced sailboat expert, Howard Rice,*** has built a highly modified Scamp with which he will attempt to explore the dangerous waters of Tierra del Fuego in Southern Chile. He is no stranger to this part of the world, having sailed and paddled a canoe around Cape Horn in both directions. He will set off on the great adventure in February 2016, and he will be filming a documentary, ‘Below 40 South’, in conjunction with Lutra Productions.**** He’ll be keeping a daily video diary as he ventures through the Straits of Magellan into the Southern Ocean.

At less than 12 feet, SCAMP boat offers big features in a tiny package

The Scamp has interested me too, since I first saw it on Small Craft Advisor. But I have to agree with you, a great little craft for rough and tumble fun but Cape Horn without self-righting ?

Would it be the smallest boat around Cape Horn ?

Jim,
Howard Rice has already sailed and paddled both east and west around Cape Horn in a 15' canoe. i doubt there's a smaller boat that has done it - small being measured by volume. (Length is a poor way of measuring size.) This time Howard intends exploring the Beagle Channel and the Southwestern Islands. I doubt he will go south of the island of Hornos, marking the southernmost point of Cape Horn.

You'll note that he has made a lot of changes to the basic Scamp. He has rigged her as a gaff yawl (technically a ketch, because the mizzen mast is stepped before the rudder stock - but more like a yawl.)

This will be a great adventure. Hopefully he'll come back with some fantastic videos of places seldom seen.