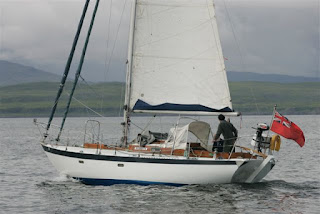 In response to Alden Smith’s comment to the previous blog, I’ve been searching for photos of ‘Barbican’. She was a yacht designed by Alan Buchanan for Bernard Hayman, who was the editor of Yachting World magazine. While surfing the Internet I came across two previous requests by Alden for photos, both made in March, 2003.* I only managed to find one. (See above)

During my search I found a number of facts about ‘Barbican’. She was a 32’ 2” LOA sloop with twin headsails, and she was built by Kings of Burnham in 1963. This 7 ton iroko planked, long keel yacht had a waterline length of 26’ 0” and a draught of 6’ 0”. She had a transom hung rudder. With 6’ 7” of headroom, two full-length quarter berths and two saloon wing berths she could comfortably accommodate a crew of four. To make her interior complete, she was equipped with a large chart table to starboard, a galley to port and, as was the custom at the time, a heads up forward. (In my opinion, not a good place, on account of the movement of the hull in anything of a seaway - not to mention the ‘inconvenience’ of getting to it!)

Bernard Hayman was a member of the Royal Burnham Yacht Club. Early in the season of 1971 he set off from his home mooring to sail ‘Barbican’ to Clyde Week for reporting on the racing. In a series of 200 mile ‘hops’ he took her up the east coast of England and Scotland to Inverness, then though the Caledonian and Crinan Canals to Helensburgh and the Royal Northern Yacht Club. After Clyde Week he headed south and called into Holyhead, Milford Haven, Plymouth and Portsmouth, later returning to Burnham.

He also sailed ‘Barbican’ to St Petersburg in the late 1970s when he and his crew became the first British yachtsmen to visit Russia since the close of the Second World War.

Thank you Bill. A very good post containing some very interesting information that I did not know before. I appreciate you taking up my request / suggestion regarding this post. I wasn't aware that Bernard Hayman was a conscientious objector during WW2 - but this would account no doubt for his reputation for holding strongly held views. He would have had to have been a very strong character to stick to his beliefs regarding not fighting during the Hitler war.

I thought the comment by Ed Dubois on the death of Alan Buchanan was very touching.

I had contact with Alan Buchanan not long before he passed away when I bought a set of plans for 'Barbican', he told me at the time that some sister ships had been built to this design. This design is in fact my dream ship and I would be nice to have the resources to build her.

At this time of life there are two facts that reside happily together - One is being retired, the other is having a large number of Yachting World, Yachting Monthly, Rudder, etc etc etc Mags (most of the older ones inherited from my father) in which I can read about the adventures (and the wisdom) of a large number of sailors including people such as Bernard Hayman (and the likes of Maurice Griffiths etc etc etc).

Reading your last two posts certainly got the memory stirring and thinking of another wonderful designer from my old stamping grounds, the wonderful Kim Holman.
Another who had the uncanny knack of designing wonderful boats,that were not only fast but stunning to look at too.
A favourite book is '3 Boys In A Boat' by David Brook which features a number of Kim's designs.
Great to be reminded of an era when the boatyards up and down the East Coast had their order books full.

Paul you are correct about Kim Holman, and lets not forget Maurice Griffiths, Laurent Giles, Robert Clark, Uffa Fox ........ the list goes on and on - Designers from a golden age of yacht design.

You are right; Kim Holman, Maurice Griffiths, Laurent Giles, Robert Clark and Uffa Fox - all of them drew the lines of fantastic yachts - leaders in their day. Kim, the Twister; Maurice, the Eventide; Laurent, the Vertue; Robert, the Yachting World 5 tonner. and Uffa, his Atalanta.

No doubt you have your favourites too.